Bandits is a similar game to the classic Space Invaders. However, in this game not only spaceships are attacked, but the invaders also try to grab fruits. The game is over when either all the player's spaceships are destroyed or all fruits were stolen. There are several types of invaders, that also attack together in the higher levels. To stand your ground against the rising number of enemies, a protective shield can be switched on.

Graphics and sound correspond to the standard of arcade halls at that time. They totally abstained from any music.

The version by Remember (available at C64Games) has 4 trainers (unlimited lives, unlimited shield energy, Bandits do not steal and level jump). 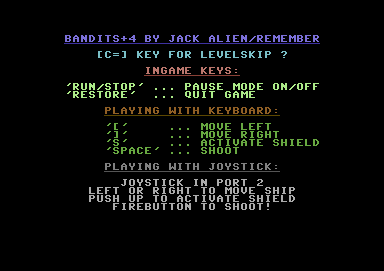 Furthermore you have the possibility to steer with the keyboard:

Rombach: "The game idea can equally be called funny or daffy (vote 3)."

Sledgie: "The game is good for shooting around "in between"; but on the long run (as with all Space-Invader-clones) too boring. Bandits was converted well and gets 6 points from me."

Robotron2084: "I'd rather want to put it into the Galaxians category, buuuut nevertheless it is a really nice, simple but above all exciting shooter. 6.5 of 10 points." 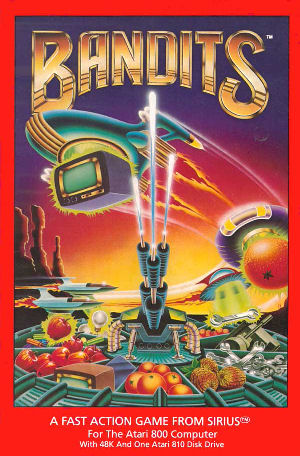 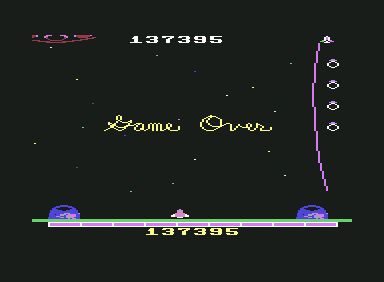