Alter Ego is an adventure in multiple-choice style by Activision from 1986. The game that was co-developed by psychologist Peter J. Favaro (Ph.D.), enables the player to simulate the life of an imaginary person - his/her "Alter Ego" - by making decisions in a great number of more or less daily situations.

The game is divided into seven parts of life: infancy, childhood, adolescense, young adulthood, adulthood, middle adulthood and old age. It starts - how could it be any different - with birth and ends with death from infirmity or respectively also earlier from an illness or accidents. Alternatively, you can also start the game in a freely selectable part of life.

Rainer Wahnsinn, 41, entrepreneur, single, proud owner of a car, a yacht and a watch.

No matter what you decide for - before the actual game begins you need to decide for the characteristics of your character. For this you either answer a questionnaire consisting of some yes/no answers or you let the computer decide the values randomly. These personality values contain attributes such as credibility, assertiveness, pyhsical health etc., that have an influence on the course of the game and can change depending on the decisions made. So if you decide as an infant to drink a bottle of cleaning agent, this will be unfavourable to your physical condition. In other situations it can happen that the programme decides according to the character values, where an action is successful or not, e.g. if it is about forcing one's point, playing the main role in a theatre piece or writing an article for the C64-Wiki (a little humor).

Each part of life is displayed by a network reminding of a flow chart consisting of different icons. Behind each icon there is an experience, i.e. a situation is described and during its course the player can decide for one mood and one action. If the chosen mood does not fit the chosen action, the programme will notify you and ask for a new decision. After playing through the situation the icon disappears from the screen and some months of game time will pass.

There are additional icons at the left and right border of the game area which serve to display the status or have other functions, as e.g. finding a partner or deciding for a job. However, these additional icons are only activated in later stages of the game.
If enough game time has passed, the message appears that the corresponding part of life has been played through, whereupon the programme sums up the character's development.

Infancy: The blooming talent as expressionist artist is quickly nipped in the bud by parental philistinism.

The little amount of graphics that you find in Alter Ego is kept functional. The build-up of the screen seems to be clearly structured and well-arranged, the icons are well to recognise. Except for a "pong" sound when choosing an icon, the game is absolutely mute.

The texts stand out due to a perfect balance between a feeling and tactful description, well dosed irony and background knowledge shown informatively concerning the corresponding problems. Only seldom will the morally hypocritical finger be wagged and the player will be put in his place with a "You naughty boy...one does not do that!". Furthermore it is fascinating how efficient the author is to appeal to the player's "baser human insticts", only to show him then the sometimes really horrible consequences of his deeds. You will notice, that a "practicioner" was involved here. 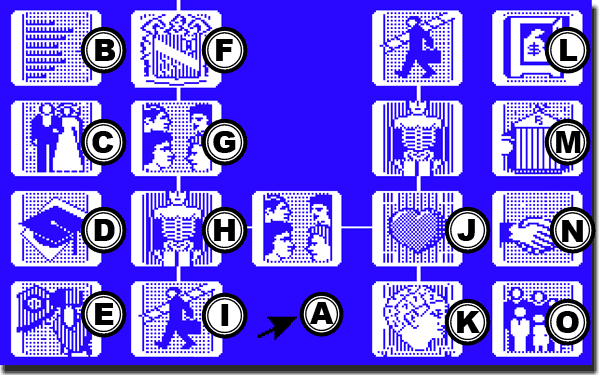 The game area as an adult: all icons are accessible.

This icon is there right from the start. Here you can look at the characteristic values and the age of the Alter Ego, which the progamm shows as bars. At certain times of a life section calling up this icon can trigger further events (holidays, father's heart attack etc.).

If you have found a permanent partner with the icon N, you can "get down to business" here and head for an engagement first. The main problem for men will be here to get enough money for the corresponding ring. The main problem for women will be to convince the grump at her side of the advantages of a marriage. Beware: untrustworthy partners get "cold feet" quickly and leave you behind alone in front of the altar! This icon only appears in the life section "Young Adulthood".

Here, part time or full time jobs are offered and need depending on the career aspiration minimum requirements in certain character values as patience, intelligence or credibility. You will often be refused by the game, because a competitor has snatched the job away from you. You need a job to be able to play through events of the category I. This icon is available from the section "Adolescence" onwards.

This icon contains events (and later increasingly conflicts) with the own humpy relatives. Most of the time these are your parents who in their smothering care always exactly know what is good for you (e.g. military school) and will not accept any interference. "Watch it, boy! As long as you rest your feet under my table...blablabladibla!" sigh...!

Get to know the other crazy people out there and their "endearing" quirks and take care that you get off lightly. Because here the importance is attached to YOUR social etiquette, even though ALL OTHERS will try to abuse, lie to or kill you at every possibility that is offered.

This icon will put you into situations in which you will have the chance to do the worst things to your body. Alcohol abuse, sexally transmitted diseases, cancer and the irrestible drive to sniff white powder from mirrors, these are the topics that you could meet here. In later levels you can additionally compromise your life expectance by simply not seeing the doctor. A dangerous icon!

Provided you have actually gotten a job with the icon E, you can now experience the pleasures of mobbing, reprimands from the superior or a sturdy burn-out syndrome. On the other hand there are amenities as promotions, exploiting your "colleague's" mistakes and uninhibited sex in the office for grabs.

Here, events with the emphasize on care, affection and humanity are in the main focus. These events are the most touching in the game, so have the hankies ready!

Depending on the age you get the possibility here to keep your brain cells on their toes by e.g. getting to know your mirror image as a small child, absolving a test as a pupil (psst....for cheat slip see section "Cheats" further below!) or creating the fastfood sensation of the decade as an adult.

Take up a credit at extortionate conditions, to be able to afford all the junk you can buy under M, or to buy a house (of pure gold!). Requires a job and enough trustability. This icon is available from the section "Young Adulthood" onwards.

O.k., you have the money, so down the drain with it, so that the economy is well! Buy the prothesis of your choice for your virility and show the others what a hotshot you are. Unbeatable: the "16-Bit High-End homecomputer with 20MB hard drive!". This icon is available from the section "Young Adulthood" onwards.

Here you can find your partner for life or the relationship trauma that finally throws you off the track. Depending on your character values you have the best (or worst) chances to hook your dream partner to make with him hair-raising experiences in the disciplines of infidelity, jealousy and war of the sexes. This icon is available from the section "Adolescence" onwards, but only from the age of 14, the "old ones" take care of that. Beware: here you can often get episodes with "sexual content"...rrrrrr!

Provided that you got married with the icon C (because Alter Ego is a decent game!), you have now the possibility to conceive a child and to repeat all the mistakes that were made on you. Big emotions during the birth are to be expected, same as conflicts with other parents who dare to question your educational methods.

Childhood Backing down to the peer pressure, all of the pocket money is spent on the record by the band that nobody will recognize again next month.

"Always act according to that maxim whose universality as a law you can at the same time will." (Kant)

You can also "play through" the game in an instant by starting at the "Old Age" section and then instantly click on the icon with the sunset. Voilà, wasn't this exciting? ;)

Middle Adulthood': The anti-children guy does not get away with his flimsy excuse... to his own regret...

Old Age: En route as sympathetic old lecher, with which a woman cannot really be angry...hehehe!

"Any person of honor chooses rather to lose his honor than to lose his conscience." (Montaigne)

WHO IS THE INVENTOR OF THE TELEGRAPH? S. Morse

WHO WAS THE AUSTRIAN-BORN FOUNDER OF THE ETHICAL CULTURE SOCIETY? Adler

WHO TAKES OVER AS PRESIDENT IF BOTH THE PRESIDENT AND THE VICE- PRESIDENT DIE? Speaker of the House

WHO FOUNDED THE AMERICAN FEDERATION OF LABOR? Samuel Gompers

WHO WAS THE FIRST VICE PRESIDENT OF THE UNITED STATES? John Adams

WHO WAS THE FIRST RULER TO CONSOLIDATE THE SLAVIC TRIBES? Rurik

WHICH OF THESE SCIENTISTS IS CREDITED WITH THE DISCOVERY OF OXYGEN? Priestly

WHO IS THE FOUNDER OF MODERN CHEMISTRY? Antoine Lavoisier

WHO IS THE FOUNDER OF MODERN PSYCHIATRY? S. Freud

WHO WAS THE FIRST AMERICAN IN SPACE? Alan Shepard

WHAT ALBUM CONTAINS ADAMS HIT SONG BELCHIN' IT OUT FOR LOVE'? Greatest Hits, best of the worst 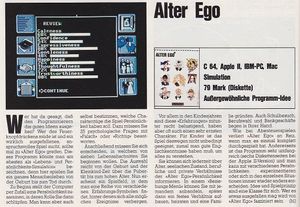 Robotron2084: "Alter Ego is a fantastic adventure, which presents the biggest adventure - which is life - in such a skilful manner that it really captivates you. Although the expression "fantastic" almost is out of place here, because situations appear here that everyone knows good enough from his own treasure trove of experience. From sky-high jubilation to sick at heart does Alter Ego not shy from - next to the always convincingly grand humour - broaching the issues of alcoholism, depression, alienation and suicide and this in a an acutely considerate and empathetic way. I don't know any other game, that has brought me to such emotional rollercoaster rides as Alter Ego has done and want to recommend the game to really everyone who has at least a rudimentary interest in psychology. The game offers really interesting moments for self reflection and is above all one thing: extremely entertaining - pure mental cinema! The only reason why I do not give the highest vote is, that due to its nature it cannot be played as often as desired because at one point you know everything by heart. 9 out of 10 points."

H.T.W: "After Robo's statement further critic is superfluous.. almost ...The most striking difference between this "game" and the real life ensues from the unpredictability (NOT hapharzardness) of the interacting persons... (to put it more simply: You can never know how people react that you (inevitably) meet in life) ... and you have no possibility to take into account previous experiences with these persons into the own calculations. Apart from that, the different ways of thinking and acting between the two sexes has only been done by two seperate programmes.... But still, for me the best programme to get to know yourself (and the possible consequences of your doings).

You can play an online version of the game here. 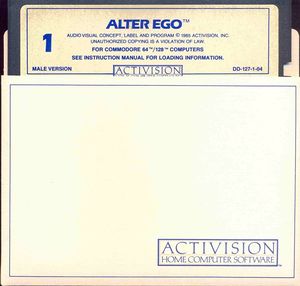 Who is supposed to "win" here? The richest? The most popular? The most honest? No, "it is the taking part that counts". Therefore no highscore table.