Start menu of the game Timefighter

Time Fighter is a classic platformer with beat 'em up and shoot 'em up elements. You control your character through different levelss, all of which represent different eras. In each time period - from the Stone Age to a future scenario in outer space - the character finds himself in a dangerous situation and has to defend himself against numerous opponents with the weapons of the respective era.

The graphics of the game are very simple, but purposefully designed. Each level is visually different and also has its own obstacles. The sprites are only in one colour and therefore look very generic, but the movements are animated quite smoothly.

The game has no music and only very few sound effects. Only a few stepping sounds and hit noises made it into this budget production.

In all levels, the goal is to reach the exit at the right-hand side. In each level, you have different weapons at your disposal and need to overcome different obstacles. Therefore there is a bit of variety and a learning curve involved in each level.

The solution is basically the same as in any game of this genre. Ultimately, it's about dodging enemies, projectiles and obstacles. However, you have to adapt your strategy a little to the changing conditions in each level. The longplay video in the lower section of this article offers a good insight into sensible strategies.

There are currently no known cheats. The CSDb includes cracks with a trainer option.

Zore: "No music, graphically rather disappointing, but very difficult. The game principle is comparatively simple, but the difficulty level is too demanding. It's hard to say anything positive about the budget title, which offers some variety in the level design and actually includes some interesting approaches and well-done animations. But the gameplay itself is frustrating. Poor collision detection, respawns often leads directly to energy losses and when you loose a life you have to restart the level from its beginning. All those issues really spoil the fun of time travelling.

The game was released in a tape and disk version. Apart from the version for the C64, no other ports to other systems are known. 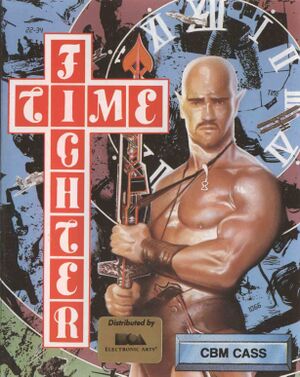 Time Fighter longplay by Rattopaz - Apparently there are people who can play this game after all...

The cover of the Time Fighter pack is very reminiscent of the poster of the film Conan the Destroyer released a few years earlier. 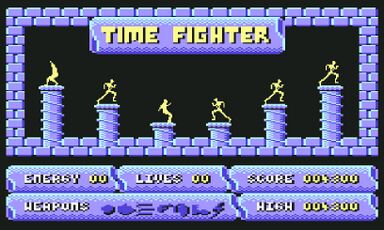