Although the name of the game suggests that it's about theft (the term "Heist" is American slang, and is generally used for theft or robbery. Common targets of such a robbery are banks, museums, jewelry stores etc), the introduction text of the Coleco Vision version comes with a surprising and very different story:

"Help Graham Crackers, the greatest superhero in the world, who has entered the museum for an espionage mission. His job is to find a micro-camera which contains the most secret information. This is hidden in one of the artworks in one of the 90 rooms. Graham Crackers' mission is complete when he has collected all art work."

The contract would run under the motto "License to Steal." ...

A typical game of the platform genre without scrolling (you switch rooms when you leave the screen). There are three levels, each with 10 screens and two levels of difficulty. The graphics are colorful and the animation of the sprites and objects is smooth. The background sound is limited to a few whistles, clicks, beeps and noises. A high score does not exist.

Shortly after the title screen appears, a little demo (the museum tour) starts. Here are the rooms of the first level shown, with a few objects that are present in higher levels. This demo is repeated until a key or the fire button is pressed.

To solve a level, Graham has to pick up all art works within the time limit. This is not quite simple as the alarm system is turned on. In addition each floor is patrolled by robots (drones, sweeper or monitors) and alarm trigger buttons are active. In addition, there are gaps between floors and a fall is fatal. Graham also needs keys to open locked doors. Keys can be collected, the same way you collect art works. Various rooms have escalators or lifts available with which Graham can get to other floors.

After Graham has collected all the art works in Level 1, Level 2 starts, etc. There are three levels, each with two levels of difficulty to solve in the game. Level 1 is red, Level 2 is blue and Level 3 is green. Each level contains 10 rooms. After the completion of level 3, you start over with level 1, but the game play is faster.

H.T.W: "I still don't believe the story from the Coleco Vision Manual, and I insist that "Graham" is as guilty as "Roger the Dodger" and his son "Slippery Sid". But I must admit that I've been playing the game for two hours now and I really wanted to fill this article a bit more. So the game isn't that bad really... Although there's no background music, no pompous graphics, etc, the playability is good, the idea of the escalator and the elevator is implemented well and with much practice, you can complete the first level ... ". 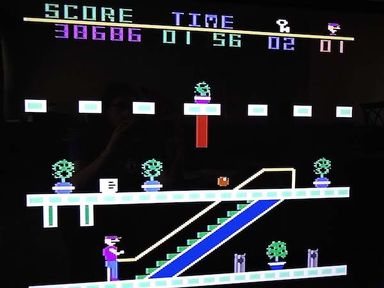