The game has a very easy game principle: You have to shoot all enemies before the walls crush you.

You are Tazz, a little man with a pistol and you are in a room, the walls are nearing from above and below. But you are not alone, there are between 20 and 230 (depending on the romm) here, additionally there are some evil creatures chasing you. If you make it to shoot all stationary bugs and then leave the room before the walls close, you will get into the next of altogether 20 rooms. After every second room you reach a bonus room.

In this bonus room you should walk over as many numbers as possible and additionally pick up the two bombs, which make life easier in the next rooms. At the beginning you own two bombs which can be released by pressing any key. After releasing a bomb all evil chasers disappear and the walls stop for a short time.

Simple graphics and only sound effects, in exchange the fluent animation and exact controls guarantee a fast game.

Room 1 (The Mask Room): Aim at the many beetles and watch the oncoming masks as well as the walls. After the work is done, directly seek out the entrance to the left or the right.

Room 2 (The Evil Eyeball Room): The three balls push the stars through the level and try to hit the Tazzman.

Coming up is the first bonus room.

Room 3 (The Spider Room): The four spiders push the smaller spiders through the room. Look out so they don't come too close.

Room 4 (The Scythe Room): Three scythes come flying and also deal with the beetles. Kill them, before they cause even more damage.

Next is the second bonus room.

Room 5 (The Butterfly Room): First the four caterpillars make their rounds on the edge of the screen and push the stars together. After a few rounds they emerge as butterflies and attack you directly.

Room 6 (The Windmill Room): The four windmills make a fuss and push the alien creatures to and fro. The mean thing here is, that after shooting them, they leave a green glowing dot, which should in no case be touched. After that they attack anew from there.

Coming up is the third bonus room.

Room 8 (The Tazz Room): The five Tazzmen attack directly and push the bubbles around.

Next is the fourth bonus room.

Room 9 (The Hopper Room): The four Hopper are serious enemies. They attack directly, but can be kept a bit at distance with the laser gun. Only with the help of a bomb they can be destroyed.

Room 10 (The Cocktail Room): In this room each one of four of the enemies from rooms 1 to 9 appear. It is either a mask, a tazzman, a spider or another attacker. They use their know tactics as e.g. pushing the alien creatures around or attacking right away. Furthermore the game speed takes on and more alien creatures appear, which need to be destroyed.

Coming up is the fifth bonus room.

Room 11 (The Super Mask Room): Almost the whole screen is now full of alien creatures. First you should shoot yourself free from the spiders, to avoid risking a false step. You get attacked by seven masks.

Room 12 (The Super Evil Eyeball Room): Seven balls give you a hard time, which push around the stars.

The sixth bonus room is comping up.

Room 13 (The Super Spider Room): The seven spiders not only try to get you by pushing around the creatures.

Room 14 (The Super Scythe Room): The five scythes appear unexpected and push around the creatures.

Following is the seventh bonus room.

Room 15 (The Super Butterfly Room): Six butterflies emerge and deal with the creatures before that.

Room 16 (The Super Windmill Room): Seven windmills so a race blowing and push the creatures together.

Next is the eighth bonus room.

Room 17 (The Super Cyclotron Room): Seven Cyclotrons attack and push the stars together.

Room 18 (The Super Tazz Room): Seven Tazzmen appear from all corners and attack. As the push the bubbles from all the corners into the middle, watch out!

Coming up is the ninth bonus room.

Room 19 (The Super Hopper Room): Here, too, seven Hopper keep you company which jostle stars through the room.

Room 20 (The Super Cocktail Room): This time, you are expected by each one of seven different attackers from the last rooms which appear in a quick sequence. Watch out for the alien creatures, which are push through the room by the attackers.

Next is the tenth bonus room.

After that the game goes on in the ´The Super Cocktail Room´ with a distinctly quicker gameplay. There are no new rooms comping up, except every second room a new bonus room....

Sledgie: "The game is really fun! I ask myself why I've never played it before. It´s a classic of retrogames."

Robotron 2084: "Brilliant conversion of the machine game with an equally simple and ingenious principle. Starts easy and ends in entire frustration: great! 7 points for this."

Rombach: "If you refrain from the bad design, the game comprises a certain wit. It cannot compete with top games, but it is recommendable for those who do not demand a great deal of the graphics. Judgement: 7 points."

Hardhatmack: "The game is excellent! I played it the first time a few days ago. Although it is already 24 years old, it provides a certain attraction. I only think it is a pity that there is no real end." 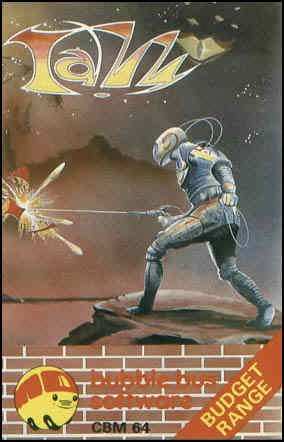 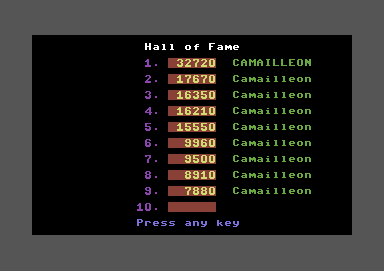