Stunt Car Racer, released in 1989, which stems form the feather of grand old man "Geoffrey J. Crammond" (The Sentinel and Revs+ on the C64 and the F1-Grand-Prix series on the PC), must be assgined to the category "Racing Game", but you will notice instantly that the name of the game was chosen wisely. The vehicle that is used in this race is extremely robust, has a V8 engine, turbo booster, roll cage and a suspension, which survives even crashes from great heights without almost any damage. You run over the track in a relatively fast 3D display (filled vector graphics). The track is build on stilts, similar to a roller coaster, with huge drive-ups and descents as well as banked corners and jumps that are displayed true-to-life in sloping positions, onto which you have been heaved with a crane. The beefy V8 engine spits fire wildly when switching on the turbo booster. This game is mainly about racing with souped-up racing buggies as fast as possible over a track with jumps, Grand-Canyon-like inclines and mean banked corners. Stunt Car Racer has also an outstanding physics engine. So e.g. the absorption of the suspension is simulated realistically, too risky jumps lead to a damage of the car. You drive up ramps without knowing what awaits you behind that and sail unexpected through the air, if you have driven too fast over a hilltop or into a banked curve. Such unintended flights can then end in a landing next to the track, because there are no track barriers so that the difficulty in the game is also not to crash from the track and also defeat the AI opponent. By reaching victories and best round times (which are saved on disk) you can collect points to go up from league to league. If you win the first league you can go up into the super league in which racing cars are equipped with more powerful engines and brakes and drive twice as fast. Another feature of the game is, that it was probably the first racing game with a mulitplayer function where two players could compete against each other when they connect their computers with a null modem cable. Unfortunately, this option is only available for the Amiga and was not taken over for the C64, but up to eight players can carry out a championship driving against the computer player, extending over several seasons and leagues.

Coloured 3D vector graphics. Concerning the acoustics, there are only sound effects used in the game. In the upper area the damage of the racing car is shown by a crack.

In the lower left you see the number of laps (L), the boost units left (B) and the advance (-) or respectively the backlog to the opponent.

In the middle there is the speed indicator. To the right, the current and the last lap time.

The keyboard controls differ a bit to avoid that more than two keys need to be pressed at the same time. Speeding up forwards is switched off by pressing one of the two brake / backward keys and the car will go in freewheel until another button is pressed.

This is done from the cockpit. First the game is "paused" by pressing the "P" key. Then press the "F1" key, the message "Pause" on the screen is changed to "Define Keys". Then the computer asks for the keys that you want to use as controls. After that you will be prompted to confirm the keys. Press the desired keys once again and you get back to the game. If you use other keys, you have to repeat the complete process and then leave the pause mode with pressing "O". In the mode for several players every player can define his keys any time during the race (preferably at the start). They are saved for each player.

Start of the race and damages[edit | edit source]

Start the race
At the beginning of the race a crane will lift you from the side of the track over the start line and the message "Drop Start" appears on the screen. After a short break it will let your car fall down in the track. If you lose your way a crane will pick up your car and hoist it onto the track again over the next suitable place. The crane avoids curves and gaps. If the message "Press Fire" appears, you need to press the fire button so the crane will give your car free. But watch out that you are over the track, or you will fall off again.

Damages at the car
Damages at the carriage: A crack at the upper rim of the screen elongated from left to right indicates the state. Hard landings or boisterous manner of driving elongate it. When it reaches the right side, your car will be removed from the race, your opponent is declared winner and all points will be awarded to him.
Structural damages: Some crashes cause damages at the main beam of the car. These are permanent and stay during the following races and seasons. The crack at the upper rim will elongated faster when crashing. Only in division 4 you start with a completely undamaged car.

Aim
The aim of the game is to be first in the first Stunt Car Racer league. There are four leagues, which contain each three drivers and two tracks. For first class drivers there is also the Super League.

Super League
You can only go up into the Super League after winning the title in the first league. There you get the chance to measure with other great drivers. Furthermore, the races take place with far stronger engines and better brakes. You start in the fourth league of the Super League and on the same tracks as in the normal league, i.e. "Hump Back" and "Little Ramp". The biggest difference is that both your opponents and you can drive twice as fast. Your aim is to fight your way through all four leagues to be Super League Master.

A racing season
A complete racing season comprises six races in arbitrary order with three drivers and two tracks. You do not take part in two of the six races, they take place behind the scenes. It can well happen that the first race is announced as "Race 3 of 6". The race leader of a league goes up to the next league.

Training
You can train on two tracks of your current league before a racing season starts.

Score
Victory = 2 points
Best lap time = 1 point
If a season ends in a draw, the driver with the most points in the best lap time score will go up.


Up to eight players can take part in the drivers' championship. The championship can contain up to four racing seasons. Each season takes place on two tracks of a league. The players can collect points by driving against the computer driver. Special bonus points per track are awarded for the fastest lap time and shortest racing time (sum of all laps of a track).

Acces to the tracks


As there is no moving up from the fourth league, you have to load a saved position from a single player game to get access to other leagues. The more leagues you can access the greater is the choice of the tracks for the race. With access to four leagues all eight tracks can be used in a four season long championship. The leagues of the Super League can also be used to get more power and speed.


The score, which is name, points, etc. of the player can be saved before the next season starts. The championship can be continued at a later point of time. To save a score of a championship , choose the "Save" option and put the letters "MP" (MultiPlayer) in front of the file names.

Restart of a championship


A racing seasons consists of two rounds, one of each track of a league. In one round all players drive one after the other against the computer. In each race there are two points for the victory and one point for the best lap time. It is possible to leave out the races left in the current round when the next racing program page appears. Press the "F1" key and the fire button at the same time, by this you get to the track bonus screen at the end of the round.

Here you find all track records and the names of the drivers that have set them. By choosing the option "Hall of Fame" in the main menu it can be viewed. There are track records for the fastest lap and fastest racing times (sum of all lap times during a race). Track records can be set during any race, but NOT in the training mode. If a record is broken, the new record appears at the display board at the end of the race.

Saving the Hall of Fame


You can save the Hall of Fame by choosing the menu option "Save" and a file name that starts with the letters "HALL".

When choosing this option another menu with the options Load, Save and Replay is provided.


Whether you load or save, you always have to enter a file name. File names that start with certain combination of letters have a special meaning.

Each other file name is interpreted as the score of a single game.
By pressing the key "Esc" while entering a file name you get back to the main menu. A message "File name inappropiate" appears e.g. if you use a file name starting with MP for saving a score of a single player game.
You need to use an empty formatted disk to save all files as e.g. the Hall of Fame, single player score, multi player score. Do not use the original game disk!


This can be used to repeat the last season in the single player mode. Here everything is reset to the state as it was at the start of the last season. This spares you reloading a score if the racing season ended with a relegation.


If you press the key "F1" while the option "Replay" is chosen the game is reset completely and you return to the single player / multi player menu.

91.51.210.193: "The game by Geoff Crammond is, I would claim, the best 3D racing game that was ever released for the C64. The graphics run perfectly, for those times on the C64 real doozer. The fun in the game is absolutely high and I can really recommend this game to everyone. For me this racing game belongs to my personal TOP 10."

H.T.W: "Geoff Crammond has probably delivered his masterpiece on the C64. After the already brilliant games Revs+ and The Sentinel which are also based on filled vector graphics, he bestows a racing game on the C64 community that resembles a roller coaster ride and at that owns a physics engine, that was probably unique at that time. The many options and the possibility to carry out a championship with up to 8 players, the saveable scores and the also saveable and combinable Hall of Fame upvalue the game (or actually simulation) further. A brilliant game!"

The fastest round of all eight tracks is counted. In the version by Remember (same as in the original version), the highscore list with the file name "HALL" can be saved permanently. 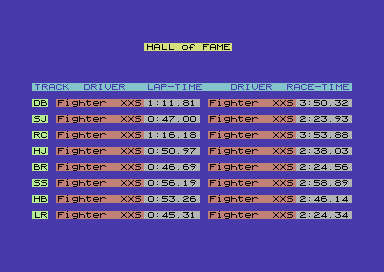 The super league can only be accessed once you have become first division champion. The only difference being that both you and your opponents are capable of higher speeds and accelerations. The aim of the Super Leage is to work your way to become Super League Champion. 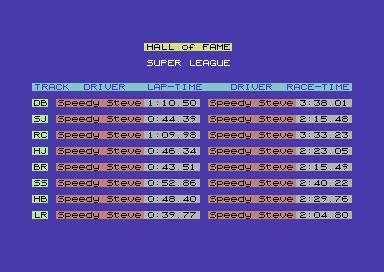