As a trapeze artist Sammy Lightfoot you jump high over the heads of the audience over balls and fire, balance over abysses, swing on ropes to a man-eating pumpkin and tame a flying carpet.

The game consists of three scenes, (each scene fits in one screen, no scrolling), when all scenes are down, you start again at scene one with a higher difficult grade.

The difficulty grade (level) and the number of players (1-2 players in turns) can be set before the start of the game.

A very "antique" game, which can be seen as belonging to the platform genre, with three levels of which each fills one screen (no scrolling). The graphics have a very low resolution, the sound is mainly a tone sequence. The controls must be "pixel exact" (which is relativated by the fact that the pixels are more like blocks). The movements of the enemies and the obstacles follow a fixed scheme, so they can be learned by heart to finish a level. The animation of the trapeze artist "Sammy" is also for the game's year of release not very outstanding.

The title screen is left by a press on the fire button, whereupon you get into the options screen. By joystick forward/backward the options are chosen, by fire they are changed.

Sammy Lighfoot follows the joystick movements to the left and right. To jump, use ropes or activate a lift keep the fire button pressed.

The faster you end a scene the more points you get. If you reach a high enough score, you can enter your name in the highscore list. (This is saved on disk in the Nostalgia version.)

Scene 1: With the help of the trampoline and rope go from bottom right to the left at half height. With the trampoline to the top left and then right over the gap. Further to the right into the bright area on the ground, (the rope starts to swing). Go to the pumpkin's platform with the rope.

H.T.W: "A very rudimentary platformer (only three screens, no speciality in the course of the game), that cannot really enthuse me. The most noticeable in this game is probably Sammy's head of hair...".

Klaws: "So-so. Seems as if they have enriched the graphics of the Apple II version with a bit of colour and this was it. When playing it for the first time I thought the grinning thing would be the target to reach, but no it is the evil pumpkin. Yes, honestly, this is supposed to be a pumpkin...! After all: 1 out of 10 points!". 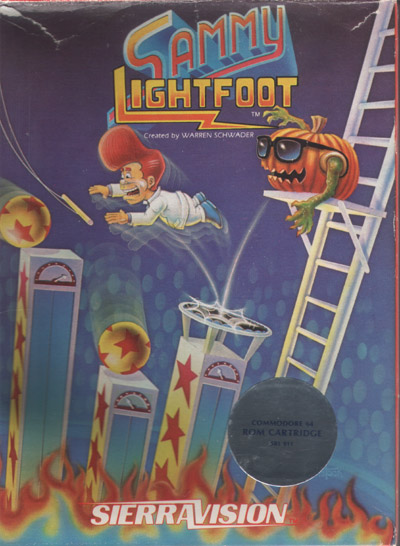 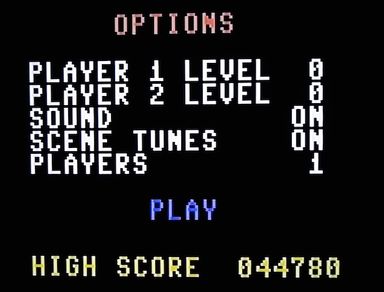