MOSpeed is an optimizing BASIC Cross Compiler by EgonOlsen71. It's Open Source/Public Domain. Being a cross compiler, it runs on a PC but generates 6502-Machine language for the Commodore 64, for the VIC 20, for the x16 (the Commander (NOT the Commodore) X16), Javascript or Powershell scripts.

MOSpeed is an optimizing BASIC Cross Compiler that's controlled on a PC via the command line/shell. It expects a BASIC V2 program in text file format, just like C64 Studio or CBM prg Studio are using it. It supports the usual placeholders like {clear}. In addition, it can operate directly on prg files and converts them to text format before compiling them. In this case, the file to compile has to end on .prg or the compiler won't recognize it as a prg file. MOSpeed is written in Java. It requires a Java runtime environment version 8 or higher.

MOSpeed can be configured via command line parameters. It doesn't make use of compiler directives directly in the source code like some other compilers for the C64 do.

MOSpeed in an optimizing compiler. It's able to detect constants (even if those are declared as Variables) and replaces them accordingly. Unused variables or the calculations used to set them will be detected and removed as well.

MOSpeed is a command line application for the PC. Because MOSpeed is written in Java, the compiler is distributed as a JAR-file. This distribution contains two script file - one for Windows (mospeed.cmd) and one for Linux (mospeed.sh) - which can be used to start the compiler.

The compilation process can be configured by using various command line parameters.

The source code can use line numbers (as usual) but also labels, which the interpreter doesn't support. MOSpeed translates these label to line numbers at compile time.

In addition to the command line compiler, there's a simple GUI available as well. It allows for selecting the target platform and the file to compile but always compiles using the default settings. It can be started by using the mospeed_gui.xxx script files in the dist directory (.cmd for Windows, .sh for Linux).

These command line parameter can be appended directly to the call to start the compiler. Order doesn't matter.
All parameters start with a /, alternatively a -sign can be used.
In the following, true|false means that the feature can be enabled (true) or disabled (false).

MOSpeed tries to stay compatible with the BASIC V2 interpreter when possible. However, there are some deviations.

Runtime errors in the program (for example divisions by zero so similar) will be catched and printed out in most cases, but the Line number will always be 0.

For this (default-)target platform, the compiler creates a.prg-file, which can be executed directly in an emulator. It can be transfered to a real C64 by using the usual means and executed there as well.

The compiler creates a .prg-file, which can be executed directly in an emulator. It can be transfered to a real VIC20 by using the usual means and executed there as well.

The compiler creates a .prg-file, which can be executed directly in an emulator. It can be transfered to a real x16 if it's finally available.

For this target platform, the compiler creates two files, one .js, which contains the the compiled Javascript and the Javascript runtime for it as well as a .html-File, which includes the required resources and starts the compiled program. There are multiple options to start it. By default, the program will output into the Javascript console and reads input (INPUT as well as GET) via Javascript prompts. The program runs inside the starter's thread, usually the browser's main thread, which in turn will block this thread until the program terminates.

As an alternative to that, the program can be run in a WebWorker. That leaves the starter's thread free to execute other tasks.

A third option allows for the output to go into a browser console view similar to the C64 BASIC editor. GET inputs will be read from there as well, but INPUT is still handled by Javascript prompts for technical reasons.

To select an option, one has to modify the .html-file accordingly. The corresponding sections are marked with comments. For using the browser console output, the files console.js and CommodoreServer.ttf have to copied over from the project's resource directory into the .html-file's directory.

The compiler creates a .ps1-file that can be run in a Powershell console.

MOSpeed supports inline assembly code, but it's disabled for compatibility reasons by default. You can enable it by setting /inlineasm=true. When enabled, everything behind a REM in square brackets will be processed by the built-in assembler. Multiple commands/labels/assignments can be written in one line separated by a semicolon. For example:

This will print "hello asm" in an endless loop but will also make the border flash by using machine language code. You can define labels as well as constants in the assembly code. So something like this will work as well:

So, basically, you can do everything that you can do in the actual assembler that comes with this project. That includes screwing up the compiled program and/or the runtime by using this option if you don't know, what you are doing. Even evil hacks like this are possible:

With this, you are splitting compiled code into one part starting at $0801 (by default) and everything after line 30 continuing at $2000. While this works, I suggest not to do things like this. Use the memhole-option instead...

MOSpeed can be integrated with CBM prg Studio, so that the compiler runs on every build and the result will be executed in the emulator. This integration isn't perfect, but quite helpful anyway. To make this a little clearer, here's an example.

In this example, I'm using a project named "compilertest" and a source file named "fractal.bas"

Check the "Post-Build Commands" box and enter the following into the now active text area:

in this particular example, it would look like this: 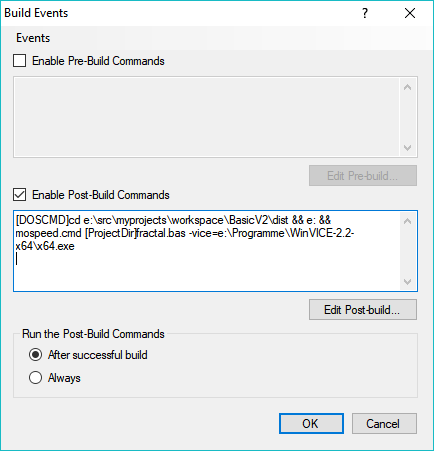 The command is a concatenated list of DOS commands. According to the documention, this shouldn't actually be needed, but I couldn't get it to work otherwise. This command will be executed after each build (for example when pressing F6 in CBM prg Studio). Please note that it doesn't use the .prg-file that CBM prg Studio creates when building, but the actual file. Sadly, CBM prg Studio offers no option so far to access the generated code right before the creation of the PRG. Because of this, this solution isn't ideal. The name of the source file has to be given directly in the command (fractal.bas in this example). CBM prg Studio offers a [prg]-placeholder, but that references the built PRG-file, which is of no use for MOSPeed. Another problem is, that CBM prg Studio only shows the compiler's output in case of a problem. So you don't see what's going on and have to wait for the compiler to complete its job, especially on larger programs.

A bug in CBM prg Studio causes the &&-characters in the command to be converted into &amp;&amp; on restart. You have to correct them each time you are starting the IDE.