There are cries for help from the planet Opthamalia. Your crew has got lost on the valley of the Leepers! These fearsome Lunar Leepers are omnivores and they especially like to eat everything that moves! These creatures feature two long gum-like legs, a single eye and a massively green beak. As they can eat up a whole spaceship with ease, you are well aware of the danger in which your crew is. So you gather all your courage and try to rescue them... And you also have to execute your primary order: to destroy this "Eyeball"...

The two parts of the game have a very different design. In the first part you can admire good animations and rudimental parallax scrolling and the second part is a Defender-like game with very minimalistic graphics with little colour.

Fly over the valley and look for the members of your crew. If you detect one, fly lower, pick him up and transport him to the cliffs at the edge of the valley where you put him down. You can shoot Leepers during flight or only avoid them to get more bonus points.

Interestingly, there is a fuel refill station at each side of the valley, at the edge below the cliffs, where you can dock with your spaceship when the fuel tank is almost empty. If your fuel is empty, your spaceship will crash.

The spaceship is utterly agile, but is has no "brakes"! Only with careful control you can avoid the deadly contact with the insatiable Leepers!

When all your crew members have been rescued or killed or when all Leeperes have been shot, the second part of the game starts.

Now you are deep in the caves of Opthamalia and you are in the way to destroy the giant Eyeball, which hides at the end of the cave system. It is guarded by the "Trabants", his scions, which also need to be destroyed. Also look out for the lasers! For this second mission you only have limited time, as there are no fuel refill stations in the cave system.

After the start the title screen is shown in turn with a demo.

H.T.W: "Strange game somehow... a background story which is - to put it mildly - bizarre... a combination of two parts of a game which have absolutely no connection to each other... in the first part of the game parallax scrolling and good animations already in 1982/83... in the second part a trimmed-down Defender... I say, form your own opinion... ;)" 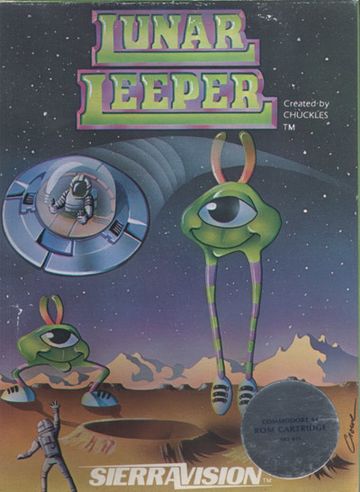 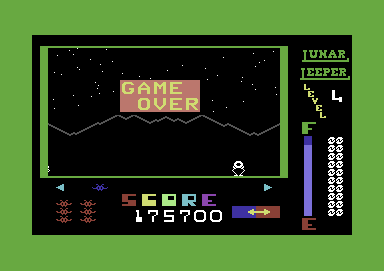