Space Battle is a simple strategy game for up to four players (Lords) and optionally a computer opponent "Deep Jones", who is, however, not the brightest. Each player commands a fleet of spaceships and tries to conquer a randomly calculated galaxy, which on many planets is already inhabited by neutral peoples (natives). At the beginning each participant chooses his home world. The first player then enters his commands ("from which planet to which fly xx spaceships) invisibly. In the status window he can then see his worlds with an overview of production rate per year and the stock of ships. The game ends after a given number of game years (10 - 999). The a report is created to find the winner.

Simple screen display. Planets are shown as numbers 0 to 9 and letters A to Z. At the right border there is an info window with the current running actions and the status of the single players. At the top a menu bar is opened if needed. In the game, a for the C64 new window technique was used, which reminds of the (PC) DOS programmes of the early 90s. The game status can be saved on disk any time. In the game itself there are no music or sound effects. On the disk there is also an FAQ (manual) and a history (list of modifications) with good background music.

The game asks you at the start how many years and maximum orders per player you prefer. At the beginning you should enter a game length of 30-50 years with a maximum of 5 or 7 orders per player and year. You can change these values any time during the game.

If you play alone, Deep Jones will be your opponent, as it does not make sense to play without enemy. But the game is most fun with several human opponents. In this case Deep Jones makes the game even more interesting. But Deep Jones always needs some time to think about its moves. If you do not want to wait for it, just do not let him join. After that you can choose between different galaxies. Just pick one and try it out, but beware of the one galaxy that is named "The other Galaxy" at the beginning. It is for advanced players who want to try something new and strange. Now you can get a cup of coffee as it takes 1:40 min until the "Galaxy Setup" is finished! The programme needs this time to set the internal tables, so it can run faster later. Earlier versions of the game did not need these tables, but in return Deep Jones needed longer to think.

When choosing the home world you should consider two things. First: Worlds that are located in overcrowded parts of the galaxy enable your realm to grow fast as ships do only need little time to reach the next hostile world. Second: On the other hand you should choose a world which lies in safe distance to your opponents’ home worlds as they possibly could destroy you and your plans very fast.

On the right side of the screen the symbol of your home world and three additional numbers are shown. The first of those numbers is the number of the player who owns this world (in this case yours!). The second number (10) means that your home world produces 10 ships each year. And the third number (100) shows that you have at the moment 100 ship available on this world. You can now use them to do attacks on hostile worlds.

Below the information about your home world there is a little window with your name and a menu with three options. The most important option in this menu is the first, "ORDERS". At the beginning this is your only option that you need, use the cursor keys to move the menu bar and the return key to confirm your choice.

After "ORDERS" has been chosen the game asks how many ships you want to send from the start world to the target world. At the beginning you should send approx. 20 ships from the home world to each of the surrounding worlds. But your orders are not visible for other players, therefore the information you enter is NOT shown in the screen, so do not marvel. Additionally, the window at the top still shows 100 ships in your home world, although you have already sent ships. By this your fellow players have no possibility to see which orders you give (except they watch your fingers while typing). After all orders have been given you press the "left arrow"-key (left to the key 1).

When it is your turn again the only thing that has changed is, that you have now less ships on your home world. The sent ships are not on the given worlds yet, as they are still on their way! Depending on the distance between the worlds it takes between 1 and 6 years (moves) until they reach their target. As you own now only a few ships on your home world, you will decide to spend no orders in this move. To jump your move simply choose the option "ORDERS" and press the "left arrow"-key.

Unoccupied worlds are inhabited by natives. These also have spaceships and use half of the production ability of their world. Therefore it is extremely difficult to conquer an unoccupied world with a high production rate. But normally the natives stay passive in the game, they rarely attack other worlds.

The other options in the menu[edit | edit source]

You can abort orders by pressing the key "Space". This gets you back to the small menu.

"MORE INFO" allows you to look at the information about worlds which are not yours. Just press the key belonging to this worlds and the "Space" key when you have seen enough.

The PREFS-Menu allows you to elongate or shorten the game and you can enter a new max. number of orders per player and year.

This should be self-explanatory. Compared to the previous versions a bug in the SAVE option was fixed, so this should work properly now.

Here you can view the maps about the realm of each player, about unoccupied worlds, the number of ships on worlds and the production rate of the worlds. From V2.0 there is a new feature, you can also view the distances between worlds as in the "MORE INFO" option of the small menu. For this you enter the starting world and the game then shows a map with the years (moves) which are needed between this and the other worlds. Note that the ships need two years to reach their full speed. This fact is regarded in the maps.

Most of the options explain themselves here.

The information that the game gives you seems evidently wrong. But this is not the case! All data from hostile worlds which you can access are "lastly calculated data", this is data from the point of time at which a player has given his last order or a world has been attacked the last time. The current number of ships and production rate cannot be seen. It is part of the game, that you do not know everything about your opponents.

Each year some worlds will slightly change their production rate. Other random events are:

Deep Jones is not as intelligent as a human player. To compensate this, it starts with 200 ships instead of 100. It follows a strategy, is more intelligent and aggressive as in earlier versions and can pose a threat, but sooner or later you will win and have found out its strategy.

The end of the game[edit | edit source]

The game ends if one of the following criteria are met:

At the end of the game all ships that are still on their way will reach their target world. Additionally, all worlds will produce further new ships during this six year long phase (it takes this long until the last ship has reach the target world). But you cannot give any more orders. This means that you have no possibility to react to attacks. Then the ranking of the players is shown. The position is calculated as follows:

Sledgie: "I played a previous version of this game with several friends enthusiastically in the past. I like much the further development with the optional computer player and the well-arranged design. The missing sound effects do not disturb, as this is no action game. The possibility to save the game status, especially when playing very long (e.g. 999 game years) are top. My total voting is 8 out of 10 points."

FXXS: "Spartanic graphics, no music and nevertheless even alone against DEPP JONES a motivating strategy game. The controls could have done with a few shortcuts, DEEP JONES could have been a bit stronger, but the random events and the natives balance this quite well, makes 8 out of 10 points." 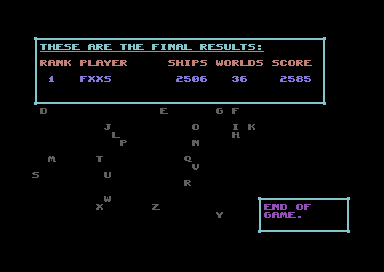