SMON is a simple machine code monitor for assembling and disassembling, which was firstly published as listing in the German computer magazine 64'er in 1984/85. Later SMON was republished in several publications of magazines like the special issues of 64'er from publisher Markt & Technik. Also an assembler course was published in the 64'er magazine: "Assembler ist keine Alchemie".

The 4 Kbyte large, easy and simple assembler SMON is started by the command SYS 49152 (for versions at $C000). The startup screen's frame and border color is switched to blue, the writing color to cyan and the following lines appear:

The first line names the CPU registers and the second shows their current content. The rightmost block shows the Status Register (SR) in binary notation with the corresponding flag names above.

The abbreviations in the register line means:

All numbers are shown and will be taken as hexadecimal!

Assemble Code starting at xxxx. It is possible to use markers (a simple form of symbolic labels) in the form Mxx. A single "F" finishes the assembly. Single data bytes may be inserted with a leading dot, e.g. .2C

Create BASIC DATA lines for the memory contents from xxxx to yyyy. Note: Line-numbers start with 32000 (defined in ($C087/$C088). The maximal length of a created BASIC line is usually 80 character (the maximal length that can be edited with the C64 BASIC editor). If you want shorter lines (e.g. 72 characters, that are usually the limit for emails and news-postings) set $C9AE to the desired length -7 (e.g. 65 for 72 characters).

The memory block from xxxx to yyyy is moved to zzzz. All absolute addresses in the code between aaaa and bbbb that pointed into the moved range are adjusted. Commonly used to insert a code sequence at address xxxx moving the old code to zzzz covering a program spanning from aaaa to bbbb. New code may be inserted into the range from xxxx to zzzz-1.

Disassemble the program starting at xxxx (and ending at yyyy) - continuous by pushing SPACE  key, stopping with RUN/STOP  key. Changes to the code are possible by overwriting the opcodes and pushing the RETURN  key.

Find all occurrences of the byte sequence aa bb cc ... in the memory range xxxx to yyyy. It is possible to specify some nibbles of the search pattern as don't-care by using the wildcard '*'. Note: Unlike most other SMON commands the Find commands are very picky about their syntax. There must be no space between the command name and the arguments given (exception: the Find Byte command requires exactly one space), and a comma before the range.

Find all references to the absolute address aaaa within the memory range xxxx to yyyy. Note that there is no space between FA and aaaa.

Find branch statements that points to address aaaa within the memory range xxxx to yyyy. Note that there is no space between FR and aaaa.

Find all tables in the memory range xxxx to yyyy. SMON defines a table as any information, that can not be disassembled.

Find all references to the zero-page address aa within the memory range xxxx to yyyy. Note that there is no space between FZ and aa.

Find all statements in the memory range from xxxx to yyyy, that use aa as immediate operand. Note that there is no space between FI and aa.

Execute the machine program at xxxx or the current PC. If the code ends with RTS, SMON is terminated. To jump back to SMON after the code is executed, the program must end with BRK.

Select the I/O device for Load and Save. Common values for xx are 01 for tape or 08 to 0B for floppy devices.

Display the memory contents from xxxx to yyyy as ASCII characters. Changes are possible by overwriting the characters.

Load a file from the standard I/O device (see command I - I/O Device) at the standard address or xxxx. Note that there is no space between the command and the filename.

Display the memory contents from xxxx to yyyy as hex values and ASCII characters. Changes are possible by overwriting the given hex values.

Fill the memory range xxxx to yyyy with the value zz.

Select the device number for the printer. Valid values for xx are 04 and 05. To send the output of a command to the printer, that command name has to be written in upper case.

Display the contents of the CPU registers. Changes are possible by overwriting the values.

Save the memory contents from xxxx to yyyy to a file. If the file has been loaded using the command L then the parameters for save are optional. Note that there is no space between the command and a given filename.

Execute the code at xxxx (or current PC) in single-step mode. After every executed command, the contents of the registers is displayed and the system is halted until a key is pressed, abort by pressing RUN/STOP  . Subroutines can be executed in real time by pressing J .

A break-point is set at address xxxx. When the code is later executed with Trace Quick (see below) the execution will be switched to single-step mode when the break-point is reached for the (yy+1)th time.

Execute the code at xxxx (or current PC if omitted) in real time. When a break-point is encountered the execution is switched to single-step mode (see TW - Trace Walk).

Executes the code at xxxx in real time. Execution stops as soon the program reaches yyyy (works only in RAM!).

All references to absolute addresses in the code between from aaaa and bbbb which are pointing into the range xxxx to yyyy are adjusted to the range starting at zzzz.

Copy the memory contents between xxxx and yyyy to zzzz. No address or other transformations are performed. Works correctly even if source and destination range overlap.

The memory ranges starting at xxxx and yyyy are compared for equality. The address of the first different byte is displayed.

Also changes back frame and background colors to the standard C64 ones (not the previous colors). Entering SMON again is possible with the proper SYS command (e.g. SYS 49152 for a version at $C000 ). 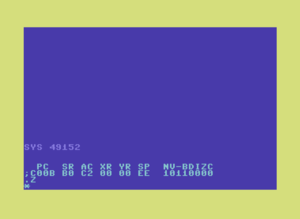