Each character in high resolution mode is formed by a matrix of 8 × 8 pixels, as illustrated to the right. Every pixel corresponds to a bit within these 8 bytes, and a bit that's "on" or "1" becomes visible in the "foreground" color for character in the Color RAM at 55296–56295/$D800–DBE7, whereas bits that are "off" or "0" appear in the background color. 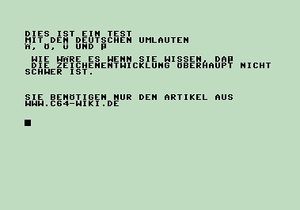