The following article shows a short overview of the C64 memory map (pages and memory addresses) as seen by its CPU. The address space may look different from the view of other chips such as the VIC.

This overview shows the status after power on of the C64 in the standard memory configuration ($37/55 in memory address $01, no cartridge).

Detailed descriptions of every memory area can be found in the associated articles.

The memory management is implemented mostly by the C64 PLA. 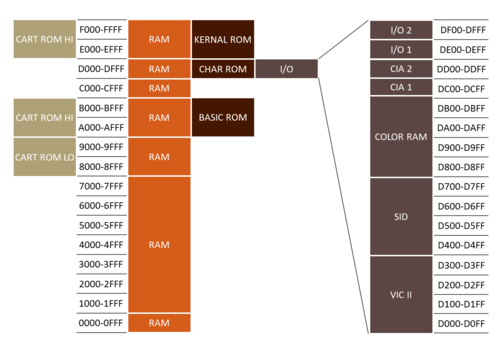 The diagram on the right displays the addressable locations, and therefore the likely layout, of all memory within the C64. The following notes are meant to be cursory and provide direction to more detailed accounts.

The default configuration is for KERNAL ROM, I/O, BASIC ROM and the remaining RAM banks to be visible to the CPU. All configurations depend upon the state of latch bits set in the Programmable Logic Unit (PLA). The 7 distinct RAM banks are the smallest zones which can be bank switched.

If ROM is visible to the CPU during a write procedure, the ROM will be read but, any data is written to the the underlying RAM. This principle is particularly significant to understanding how the I/O registers are addressed.

If cartridge ROM is present it can be located in up to three addressable locations. However, only two 8 kByte banks can be seen by the CPU at any time.

The exact content and purpose of each memory bank can be found in the RAM Table, ROM Table and I/O Table below.

Cartridge ROM only becomes resident if attached to the expansion port on power-up. It is included for completeness as a record of the addresses it occupies as a ROM bank.