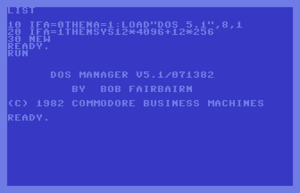 The DOS Wedge is a small program to ease the use of a Commodore disk drive. It has the following properties:

> can be used alternatively to @ to begin a floppy command. A value in square brackets is optional.

The wedge patches the CHRGET routine in the Zeropage, where every character that is processed by the BASIC interpreter is checked. If it is a command of the wedge the corresponding DOS wedge routine is called.

On the left is the SMON disassembler listing. On the right in the comment are the original values.

Jump back to the CHRGET routine: