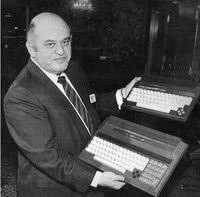 The CES (short for Consumer Electronics Show) is an event held yearly where manufacturers gather to showcase new developments.

The fair starts in 1967 (first fair was in New York) organisated by the Consumer Electronics Association (short: CEA) and runs yearly. In the past, also in the years 1978 until 1994 the CES was running two times in each year (in winter times like January in Las Vegas and in summer times like June in Chicago).

A lot of computer systems like the Commodore PET 2001 or the homecomputers like VIC-20, C64, C128 or Amiga, and also a lot of hard- and software like GEOS had here its premiere.