Commodore's idea was that the Executive 64 family would become the "affordable portable" and unveiled the first model at the Winter Consumer Electronics Show in Las Vegas in January 1983. Demonstrated as a prototype and called the SX-100, it was essentially a C64 with an upgraded kernal connected to a monitor and a half-height[1] disk drive packaged into a relatively small metal box. Proposed options[2] included a monochrome or a “color display” [3] from an integrated composite monitor, could be fitted with one or two floppy disk drives [4] and, allegedly, it “was battery powered” [5] although this was never part of the production model due to weight. Reportedly, Commodore proposed to have the first machine ready for 1 April 1983 [6] and by the Winter Consumer Electronics Show January 1984, the first Executive 64 was released as the SX-64[7]. There was evidence that it was also being offered at a discounted price of 750 USD. The next Executive 64 to be released was called the DX-64. It was to have an upgraded power supply and a second integrated floppy disk drive or modem by sacrificing the magnetically-shielded storage compartment. However, by February 1985 the DX-64 was reported as being suspended indefinitely [8]. The DX-64 was manufactured in very small amounts, and a number of working units have been confirmed to exist with "at least one known of in the U.S., and a few in Germany"[9]. Manufacturing ceased in 1986.

Sig Hartman was director of software development for the Executive 64.

Identical to the Commodore 64 with the following exceptions: 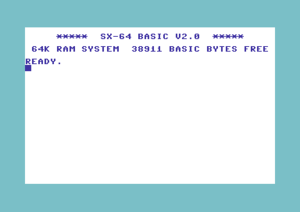 The system requires a power source, as there is no internal battery pack. The carry handle can be adjusted and is intended to act as a variable height stand in order to optimise the viewing angle. The front cover unclips to reveal the keyboard; it is connected to the motherboard at the bottom of the unit via a cable and a D-Pin plug. The on-off rocker switch is at the rear of the machine. From a cold or warm boot (with no cartridge in place), the monitor displays a white (colour 1) background with blue (color 6) text and a cyan (colour 3) border . The startup message (will alter between SX-64 and DX-64) reads:

Although this display defaults to the in-built 5" monitor, an external monitor can be hooked-up to view a larger picture with both monitors displaying the same content. As there is a built-in monitor, Commodore did not install any connectivity for a television and consequently there is no RF modulator or antenna connector. It was reported that there would be a slide-in television tuner[11], but it never materialised. The default device for load and save operations is the floppy drive 0 (device 8) as there is no datassette (device 1) capability. This means there is no requirement for naming which port the computer should use for load and save operations. The load shortcut (SHIFT  and RUN STOP ) therefore refers to floppy drive 0. The reset button allows for a warm boot.

Although the Executive 64 family is supposed to "support all the same software, peripherals and goodies as the stay-at-home-64"[12], there are a number of issues:

The datasette port on the C64 has a +5V pin which has been used to provide power to some third party external peripherals. Such devices which utilised the Centronics parallel printer interface could workaround this problem by receiving a supply from a number of sources: through an interface for an AC power supply; by a connection to the Centronics port (pin 18); or an adaptor to connect to a control port.

The original built-in power supply of the SX-64 limited expandability. This was rectified with an upgraded power supply on later production runs (from GA4 serial numbers) and the DX-64 model.

There are some PCB differences which have led to compatibility problems with some C64 cartridges. The top-loading cartridge port in early models had improper shielding, being nothing more than a ribbon cable to the mainboard, and REUs and later cartridges would not work correctly in it. The problem was so bad that Commodore was forced to put out a service pack to replace the ribbon cable with a sturdier one[13].

Compatibility with Commodore RAM Expansion Units varies. Early SX-64 power supplies (prior to GA4 serial numbers) cannot handle the extra power consumption of the REU. The physical placement of the cartridge port can prevent the REU from seating properly. The 1700 and 1750, 128K and 512K units intended for the C128, are said to work more reliably with the SX-64 than the 1764 unit that was intended for the regular C64. Some SX-64 owners modify Commodore REUs to use an external power supply in order to get around the power supply issues. 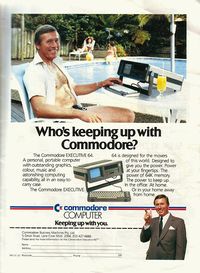 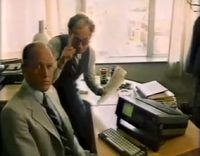 With available CRT technology, the larger the screen, the heavier the computer. Therefore the 5" monitor is a trade-off of weight versus cost versus size. It is not easy to read the screen, but at the time critics were generally positive about its clarity. That said, it obviously compares poorly with a standard monitor or large television screen.

There is lot of metal in the box and it still weighs 26 lbs. It has often been referred to as "luggable" rather than "portable" although is still lighter than a C64 with the peripherals required to run at remote locations.

The advertising was very poor when compared to the campaign for the C64. The Executive 64 is rarely seen being carried, and demonstrates little of its professional and portable capacity. Some potential buyers also held off on a purchase when the DX-64 was announced which came too soon in the SX-64 sale cycle. Consequently, the DX-64 never became widely available due to the slow sales of the SX-64, creating a Catch 22 situation similar to that endured by Osborne after announcing an improved version of its computer.

A series of software packages were developed to target the portable computer user but were not of the quality of rivals. The lack of a mouse to drive the applications was also a hurdle.

There were other computers at the same time which gave the same, or a better, performance than the Executive 64. The Osborne 1 and Kaypro II (Zilog Z80 CPU, CP/M OS) competed at the 8-bit level, but the market was quickly to be dominated by new models such as the Compaq Portable (16-bit CPU, MS-DOS).

The SX-64 did however gain a following with user groups and software developers, who could quickly pack and unpack the machine to use for copying software or giving demonstrations.

Ahoy! Magazine, March 1983: Comments included "the keyboard was better than the 64's", also "the monitor isn't hard to read at all" and "the disk drive was durable enough for travel". While criticizing the lack of any provision for internal or external battery power, the magazine concluded that the average $750-800 retail price was "worth every penny!".

Run Magazine, May 1984: Comments included "I have to give the Executive 64 a solid four-star rating", "it's a dream to use", "it performs flawlessly" and not worried about the weight, "it's easy to take along with you". Concerning sales, it was was stated that "the dealers cannot get enough of them". 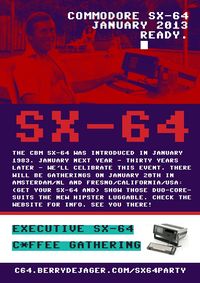 Even though it didn't sell well, it has aged particularly gracefully, and intact units command a respectable price today due to its novelty value. For a relatively uncommon unit during its heyday, they are now becoming more and more routinely seen and used by the modern Commodore retro-enthusiast. To celebrate the 30th birthday of the SX-64, enthusiasts hosted a party[17]at Starbucks in Amsterdam/The Netherlands, Fresno/California, Austin/Texas, Seattle/Washington and Toronto/Canada holding an online meeting using SX-64s[18].

Some hobbyists and commercial companies have installed various peripherals in the SX-64's empty slot above floppy disc drive 0:

In 1984, the German company Tesa had the requirement for their personnel to print labels in the field and commissioned a mobile computer called the Etikettendrucker (label printer). The Hamburg-based company ACOS made the conversions[25] from standard SX-64s into the Tesa 6240. The conversion, with the cost of each unit set at 10000 DM (1985 prices), resulted in a number of significant changes: