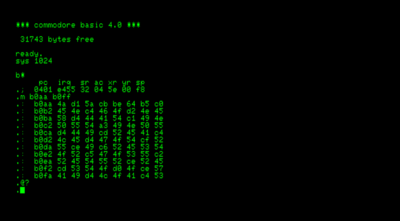 The PET of the CBM series 20xx/30xx/40xx/80xx and CBM-II series PCs integrates a machine code monitor called TIM (short for Terminal Interface Monitor). TIM can be started using on of these commands:

For the first series (generation) of PETs was used TIM only as software, loaded by tape (or disk).

The monitor is entered with the execution of the opcode BRK (from BASIC with any SYS call to an address pointing to a zero) passing the control over by the BREAK vector, which is shown in the register display with the message BREAK or in older versions B*. This monitor does not contain special commands for handling break-points or tracing an execution path. However, one may set a temporary BRK bytes (0 value) to force a break on a desired address.

After the start is shown this message:

The first line names the CPU registers and the second shows their current content.

The abbreviations in the register line means:

The following commands can used:

All values, numbers and addresses are shown and interpreted as hexadecimal!

The input prompt is the char ..
If a wrong input (unknown command) leads to appearance of a question remark ?. Input/output errors are display as I/O ERROR #number.

Some CBM models CBM-II series with their extended memory model accesses usually the system bank (bank 15). To get access to other banks one have to manipulate port $01, which addresses the appropriate bank numbered in range 0 to 15. This is only for data access (memory dump, disassembling), while code execution is always limited to bank 15 which contains the monitor itself and is needed to stay active for further usage.