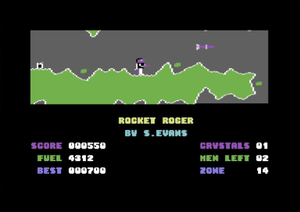 A screenshot (a compound word made up of the words screen - for screen - and shot - synonym for shooting) describes a digital image (photo, computer graphics, etc.) of a current monitor image. Other terms for this are hardcopy (although this is more a real printout of a screenshot output to a printer) or snapshot.

A screenshot is often taken by computer games or applications with the help of tools to explain or clarify something; for example, to record the achieved high score as a proof photo.

In modern computer systems screenshot functions are already included in the operating system.

With the C64 this only works with additional software, which is either loaded beforehand or implemented in a corresponding cartridge.

On a C64 the screenshot or hardcopy program must already be in memory as machine language program. It is then activated by a key combination e.g. <Commodore> key + < P> and either prints the screenshot directly to a printer (hardcopy) or saves it in memory (screenshot).

For the C64 or older Commodore computer systems the following screenshot programs are available: