In the early 1980s, Commodore produced two new models of the C64 for North American schools: the PET 64 (Educator 64-1) and the Educator 64-2. Both computers were standard C64s but with a PET case. They were unrelated to the earlier Teachers' PET, which was a real PET 2001-8N!

The PET 64, also known as the CBM 4064 or Educator 64-1, included a PET 4000 style black-and-white monitor with an internal speaker. Later models had a colored screen. The PET 64 came supplied with an adapted C64 KERNAL. With its metal case, it weighed almost 20 kg. 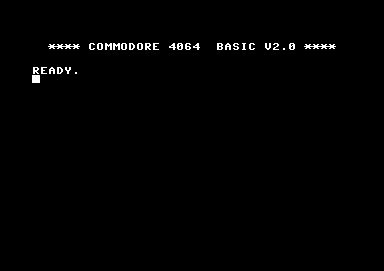 Start screen of a PET64

The Educator 64-2 had a green screen monitor with a regular C64 KERNAL that displayed the standard C64 boot screen. It featured a headphone jack and an internal speaker with a volume control. The case on most Educator 64-2s was plastic.

The space above the keyboard held a reference panel with keywords and shortcuts for BASIC V2, Logo, and the hardware, such as the datasette, floppy disk, and the printer.

Other differences against the C64[edit | edit source]