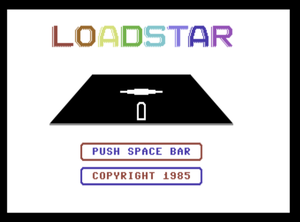 Loadstar [ISSN 0886-4144] (1984-2007) was a monthly digital magazine (diskmag) for the Commodore C64 computer, originally published on 5.25 inch floppy disk by Softdisk Publishing. Disks were double-sided and occasionally an issue contained two double-sided floppy disks. Its name was derived from the command LOAD "*",8,1, which was commonly used to read commercial software on a 5.25 inch floppy disk for use with the Commodore 1541 disk drive. The name was also inspired, partially, by the term "lodestar". 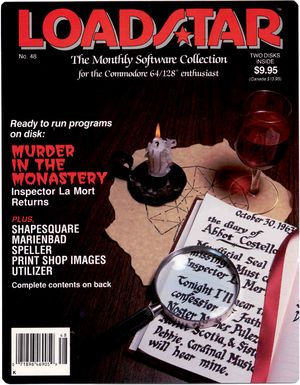 Loadstar was the second platform for which Softdisk published a disk magazine. The first had been created for Apple II computers in 1981. By 1984, Commodore 64 was a very popular home computer due to its inexpensive price, advanced graphics, and sound capabilities.

When it was first published in 1984, Loadstar was the only digital publication for the Commodore 64. Early issues of Loadstar were produced by Softdisk staff. Most of the staff possessed more experience with Apple than with Commodore computers. Much of this early software content had been ported from programs originally written for Apple computers.

In time, however, staff and freelance contributors specializing in software written specifically for Commodore computers were recruited. Each disk typically contained software reviews, programing tips, how-to instructional articles, game reviews, and an assortment of software. Much of this content was submitted by Loadstar subscribers.

Readers of the magazine were encouraged to submit their own software and articles to Loadstar on floppy disk. They were also encouraged to review source code for the included programs, then submit their own improved versions back to Loadstar for publication. In fact, during the first year or so of publication, Loadstar included a floppy disk and return mailer along with the magazine disk for readers to mail in their comments, questions, or programs each month.

Another notable feature, in some early issues, was the inclusion of a disk with software to access a new online service named Quantum Link. This service had been fervently pitched to Loadstar by the head of marketing, Steve Case. Interestingly, Quantum Link eventually became America Online. 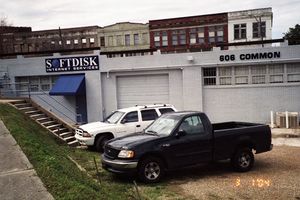 606 Common Street Shreveport, Louisiana in 2004. Basement offices where Loadstar was published for much of its history, despite references to the Loadstar Tower

In November of 1987, Fender Tucker was hired as managing editor of Loadstar. As such, he provided Loadstar with a rather distinctive style and atmosphere. For instance, Fender created a particularly memorable touch by including numerous references to the legendary Loadstar Tower, the supposed location where Loadstar was published. In fact, Loadstar's offices were located in the basement of a small single story building at that time.

In 1989, Loadstar published DigitHunt, a mathematical numeric puzzle game, which quite possibly might have been the first home computer implementation of Sudoku. Also in 1989, Loadstar 128 was launched for the Commodore 128 personal computer. This disk magazine was published quarterly until its final issue #42 in 1998.

As years passed, the Commodore 64 was increasingly regarded as an obsolete computer. Softdisk shifted company resources to produce software for more current operating systems and computers such Windows or Macintosh. Nevertheless, Loadstar endured. Ultimately, it outlasted those disk magazines produced for newer platforms.

By issue #146, published in 1996, Softdisk no longer wished to support Loadstar. It was purchased by J & F Publishing, a company co-owned by Fender Tucker and his wife, Judi Mangham, who was co-founder of Softdisk. Publication of Loadstar continued long past its natural lifespan, due to a cult-following of hardcore Commodore users and fans employing Commodore 64 emulators on other platforms.

Officially, 249 issues of Loadstar were published in total. Publication was scheduled to cease after issue #256. However, Dave Moorman moved on in 2008, leaving issue #250 unpublished.

Originally, Richard Derocher assisted with beta-testing of Loadstar #250 in 2008. Subsequently, he edited the beta, removed most of the bugs, and released an unofficial version via the Internet on June 17, 2010. This release was made available as four disk images (in .d64 emulator format) and as a single disk image (in .d81 emulator format).

As of 2018, J & F Publishing still officially owned Loadstar. However, Fender Tucker currently concentrates on other ventures, such as publishing the works of Harry Stephen Keeler under Fender's Ramble House imprint. Although, Fender still offers the LOADSTAR COMPLEAT CD-ROM for sale via his Ramble House website. This CD-ROM is accessible by PC and Loadstar disk images function via Commodore 64/128 emulation software.

As of 2018, a supposed official Loadstar website presently exists at loadstargallery.webs.com. However, information pertaining to ownership, maintenance, and any means of contact for that website remains undisclosed. 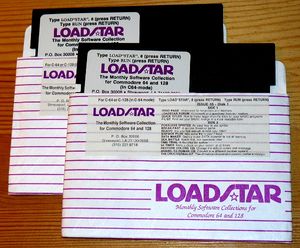