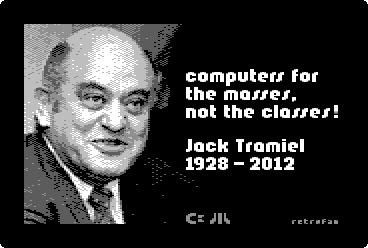 Jack Tramiel (* December 13, 1928 in Łódź, Poland † April 8, 2012 in California, USA) (born Idek Trzmiel) was a businessman and key figure in the popularisation of 8-bit and later 16/32-bit computers. He was was married and had three sons. In 1953 he founded Commodore and eventually went public with his company Commodore Business Machines (often referred to as CBM) in 1962. His company produced many early 8-bit computers, but his greatest success was the C64, launched in 1982. He left Commodore in January 1984, and in July of that year bought the Consumer Division of Atari Inc from Warner Communications, turning it from a failing subsidiary into a viable and successful company before finally selling it in 1996.

Unlike many others in the computer and related industries of the time Tramiel was not a "geek", but was renowned for his hard bargaining, once remarking that "Business is war." It was during his time at Commodore that he saw the potential of a wide market for what until then had been seen as specialised and expensive machines, as summed up in his phrase "We need to build computers for the masses, not the classes."

He spent his last years in retirement with his wife in Monte Sereno, California.