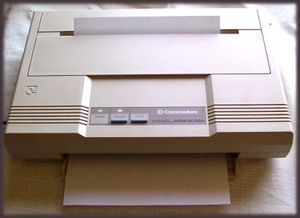 The ink-jet printer Commodore MPS 1270 A.

The ink-jet printer exists as universal printing device since mid of the 1980's. Since the early 1990's they are also used quite often for private purposes and superseded the dot-matrix printers which have been used so far.

An ink-jet printer generates text and graphics by emitting ink particles to the paper. Next to black ink, now also coloured ink is used. By mixing the primary colours yellow, magenta and cyan any colour can be created. The ink is permanently developed and improved, so meanwhile there is waterproof ink available for printing photos.

Today a lot of companies are manaufacturing ink-jet printer, but from the beginning there were the companies Hewlett Packard and Canon, and a bit later also Epson, which belong up to now to the leading manufacturers.

Ink-jet printer of other manufacturers at the C64:

Thermal ink-jets (also called bubble-jets) use heat to vaporize ink and create a bubble, forcing ink out of the nozzle onto the paper. Both technologies produce similar quality output.