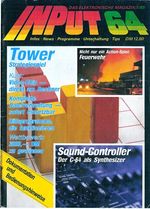 INPUT 64 (ISSN 0177-3771) was a computer magazine for the C64, which was published monthly in Germany from 1985 until 1988. It contains a data medium like a datasette or a floppy disk, which a electric computer magazine (today known as diskmag).

The title of the magazine is named similair with the BASIC command INPUT, which is using for input datas. The first letters of the subtitles words are together "INPUT 64" (German words Infos, News, Programme, Unterhaltung and Tips). That was also the concept of this computer magazine.

The advantage of the thise magazine was, that over the diskmag menu the readers the programs can easily load and start. The software was described in detail in the print computer magazine. The tape and the floppy disk was write protected!

After a short intro with music (main theme) appears the diskmag menu. The programs are short descripted in this menu. With the key SPACE  can changed the program, which is load by pushing the key RETURN .

The programs, which are contains on the diskmag are listed in the German C64-Wiki.