Encoding of the bit values and markers (NTSC)

Many computers of the home computer era around 1980 used FSK (Frequency-shift keying) to encode the "1" and "0" on tape, using different frequencies for each - e.g. the Kansas City standard.[1] The Commodore Datassette is making use of a pulse length encoding, which "The PET Revealed" calls superior to FSK.

There are three sorts of pulses, that are made use of:

Actually, the pulses occur as one full period of the respective frequency, so a short pulse is 176 µs of HIGH and 176 µs of LOW level etc.

The bit values and the required markers are encoded with combinations of two of these pulse periods.

The pulse durations vary between NTSC and PAL machines. Since the NTSC clock is approximately 3.8 % faster (1.0227273 MHz for NTSC vs. 0.9852486 MHz for PAL), the PAL pulses are 3.8 % longer. However, it is no problem to exchange cassettes between NTSC and PAL C64s. The speed of the tape motor varies, too, so there are synchronization algorithms integrated into the data decoding.

The different PAL pulse lengths and frequencies are:

Each byte has a recorded duration of 8.96 ms. 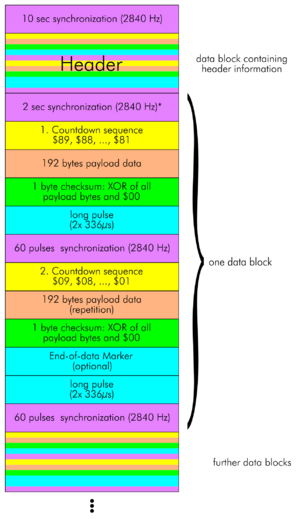 Structure of a file and the data blocks

The 192 bytes of payload are stored twice in one block. Beside the checksum, this is for detecting data integrity problems due to auto dropouts.

Each data block starts with a synchronization leader of short pulses (2840 Hz for NTSC). This is either 10 seconds for the first block or 2 seconds for every other block. The leader provides time for the tape motor to reach the correct speed. Also the Kernal calculates a speed correction factor during this time, since tape speed might vary for different motors. For this is the reason, despite the different PAL and NTSC clock frequencies, there is no issue with swapping tapes between systems.

Each data block is followed by a one-byte checksum. It is calculated by sequentially XORing $00 and all payload bytes.

The end-of-data marker is an optional symbol, marking the last data block.

The header block is the first data block in a file and is exactly 192 bytes in length. The header payload consists of the file type, the start and end address (used for certain header types) and the file name.

This header type denotes relocatable programs. In general, these are BASIC programs which do not necessarily require to be located at specific addresses. These programs are loaded at the start of BASIC RAM.

This type denotes a data block of a sequential (ASCII) file. The bytes 1-192 (which is 191 bytes) contain the payload data.This block does not make use of the start and end address.

This type denotes the header of an ASCII file. Besides the header type, the payload of this block contains the file name.

This type denotes an End-of-tape block. In case the EOT is reached, before a header with the desired file name is reached, a ?DEVICE NOT PRESENT ERROR is reported.

The secondary address, which is used, when a file is saved or opened for writing influences the header type, that is recorded on tape.