CBM-Command is an orthodox file manager similar to Norton Commander. It was written in April 2010 by Payton Byrd and Greg King with CC65. CBM-Command can perform the following operations:

The orginal program is loaded with LOAD"LOADCBMCMD",8 and started with RUN. The CBM-Command starter detects the current computer system and loads the right main program.

Generally, with CBM-Command the keys CRSR ⇑ ⇓  are used for scrolling through the directory in the active window or to select a file.
The keys CRSR ⇔  to change the active window (left/right).
The key SPACE  is used to mark and select files. Selection will be used for batch operations as copying, renaming or deleting files.
The 8 important program commands can be seen in the last row of the screen.
In the first row of the screen shows the actual selected file with its filename and needed blocks.
In the last row of the window you see the actual drive number (left) and the free blocks of a directory (right).
You can use all keys for entering texts into an input window.
Security queries or starting operation(s) will be started with the key RETURN  or canceled with the keys RUN/STOP  or ↑  (ESC ).
A selected file (PRG and SEQ ) can be opened with the key combination SHIFT +RETURN  in the built-in text viewer.

Commands for changing the window:

In the last row of the screen, you see these commands permanently:

The CBM-Command Configuration Manager is loaded on a C64 with LOAD"CBMCMDCFG.C64",8. In the manager the user can change the colours (key 1  to 9  with a colour palette), the hotkeys and the standard disk drive (disk drive number; (key L  left drive R  right drive). The function keys cannot be modified !
The customize changes will be permanent after saving with the key F2  ! 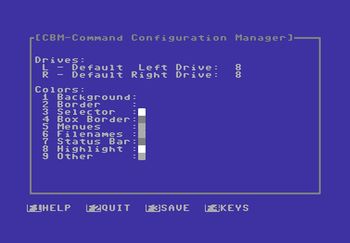 The screen of the CBM-Command Configuration Manager

In the row at the bottom you see the follow commands:

The hotkeys can be changed: 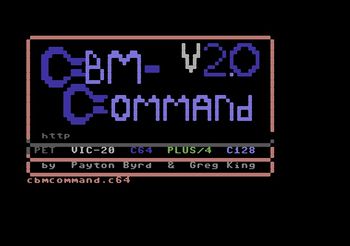