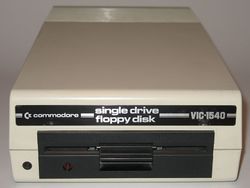 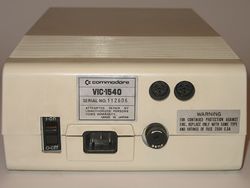 The VIC-1540 differs from the old model 1541 in only one aspect: it talks a bit (but not much) faster on the bus. This works with the VIC-20 whose CPU is always working and can listen to the bus all the time, but it fails on the C64 since the C64's CPU is sometimes shut down by the VIC-II chip for a while. Normally, the VIC-II shuts down the C64's CPU for 40 machine cycles (ca. 40 microseconds) once per line of text, or once per eight lines of graphics pixels, when it's drawing the display area (i.e. not while it's drawing the screen border). During those 40 cycles the CPU can't listen to the bus, and that's enough to make it miss a bit once in a while when used with a VIC-1540. The only thing that was changed on the early 1541 was that it made sure that it always put every bit on the bus well over 40 cycles, so that the CPU can't miss one. For the Datasette, they solved the same problem in a different way, by simply blanking the screen; when the screen is blanked, the VIC-II doesn't interrupt the CPU. That's why the screen has to be blanked during cassette loading on the C64 but not on the VIC-20. You could use a VIC-1540 on a C64 with blanked screen, but that isn't very comfortable.