Tiny-EPROMer (also: Tiny Eprommer) is a C64 hardware device that creates (or ‘burns’) EPROMs (Erasable Programmable Read-Only Memory). It first appeared as an electronics project in 64'er Magazine 8/88 and was re-released in special issue 84 in 1992. 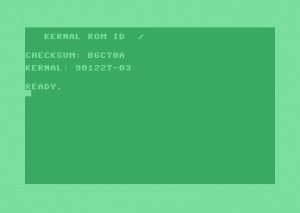 EPROMs allow replacing the C64's ROMs by custom versions using an adapter PCB. Alternate KERNALs range from slightly modded stock variants (e.g., with modified start-up screen text and colors) to larger modifications such as JiffyDOS. Using a device such as a Switchless Kernal or Dual Kernal adapter, the user can choose between multiple KERNALs.

The eprom should only get inserted into the socket once the software has been started already as the hardware may apply 21 volts voltage on C64 startup or with other running software.

Programming 27512 eproms is done in two 32KBytes passes and flipping some switches between passes.