SuperCopy 64 is a disk utility program for the Commodore 64 personal computer. It has the ability to perform disk functions with either a single or multi floppy disk configuration. Functions, which are selected from a simple menu-style user interface include:

SuperCopy 64 is programmed in machine language. Once running, the user can assign the drives he/she wishes to use as the "source" and "destination" disk drives. If the user only has one disk drive, all of the functions of SuperCopy 64 are still available, however disk swapping will have to be done by the user to complete any of the file copying tasks.

SuperCopy 64 does not support duplication of copy-protected disks (those that make use of disk errors).

Although SuperCopy 64 can work with multiple drive configurations, it can only work with two at a time, the "source" and the "destination" drives. However, these drive designations can be easily changed on-the-fly by the user, making file swapping between drives a simple task. 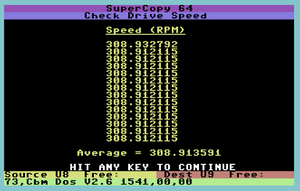