Relaunch64 [1] is a free and OpenSource text editor, which is written in Java (licensed under GNU GPL 3). This IDE focuses on C64 assembler coding on Windows, Linux and OS X. Compared to usual editors, Relaunch64 has a clean and intuitive user interface, yet it offers many features that make coding faster and easier (support for many assemblers, syntax highlighting, code folding, code navigation...).

Unlike other IDE's, Relaunch64 was specifically designed for C64-assembler-coding and hence runs "out of the box". There's no need for complex setups, external plug ins etc.

Latest release is Relaunch64 3.3.7, in English. [2] Relaunch64 is being developed by Daniel (Testicle/Payday) and Kajtár (Soci/Singular).

Two screenshots from Relaunch64 in action: 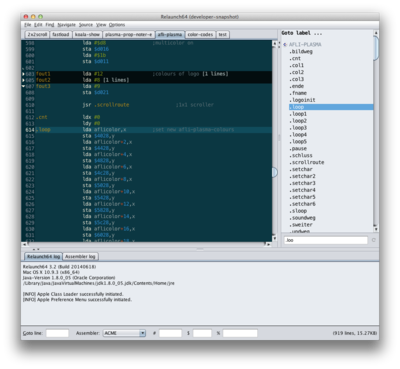 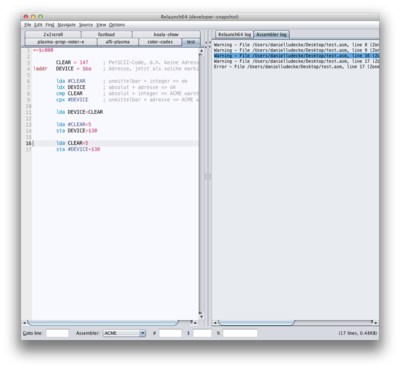 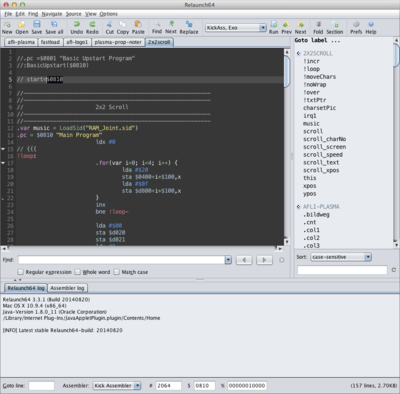 Since version 3.0, Relaunch64 requires Java 7 or higher. This is already installed on most Linux-OS. There are free downloads for Windows and OS X. [3]

Following cross-assemblers are supported by Relaunch64: [4]

There's no need for complex setup when you want to use Relaunch64. However, two points are importend to consider, in order to compile sourcecodes properly.

You can choose an assembler in the statusbar at the bottom of the main window. Choose the assembler related to the syntax used in the source file. 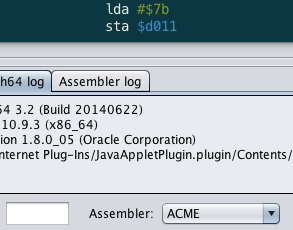 Certain features depend on the correct choice of assembler, such as the syntax highlighting or the code navigation.

To compile and run sourcecodes, you only need to define user scripts. These scripts are similar to command line scripts or terminal commands and will exactly be executed like those. You can define scripts in the preference pane: 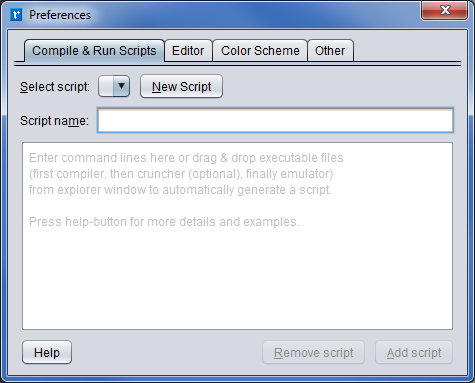 If you are familiar with terminal syntax, you can easily write your scripts by hand. Use a new line for each command line (see examples below). However, you can also let Relaunch64 create the script by dragging and dropping assembler, cruncher and emulator executables into the script text field. This figure shows an example from OS X, where KickAss.jar is dragged from the Finder (file explorer) into the script text field: 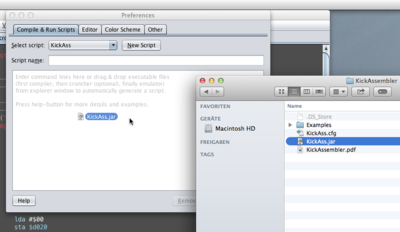 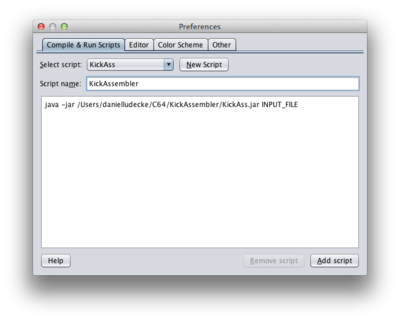 This can be repeated for crunchers and emulators to add further script lines. Finally, type a name into the text field Script name and click Add Script. Relaunch64 automatically creates recommended parameters for all supported assemblers as well as for Exomizer and PuCrunch.

To specify directories or input and output files, there are following constants that should be used:

As script commands are passed to the commandline interpreter, you can use any shell-commands that work on your system. Here is an example from Unix-systems:

Before you can compile and run sourcecodes, you have to setup scripts. Then simply run the script by using the Run-command in the Source-menu. The currently selected script (shown in the toolbar) will be executed then. Use the combobox or the command Select script from the Source-menu to select one of your script. 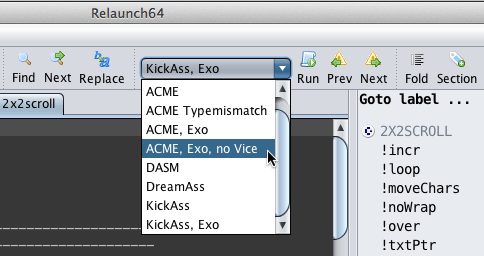 The script will be executed and all messages from the error streams are logged.

If you have hidden the toolbar, the Select script from the Source-menu will popup a window where you can select a script: 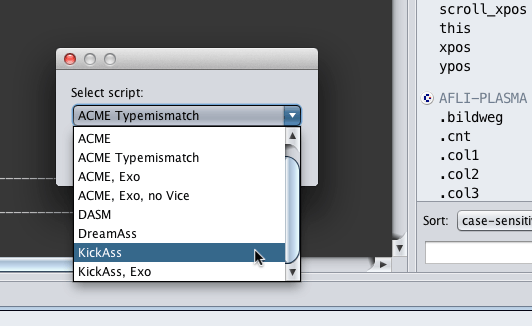 The Relaunch64-log logs all processed script lines and how they were passed to the terminal.

If an assembler, cruncher or emulator produces any messages, either information, warning or errors, these messages go to the assembler-log:

When any warnings or errors occur during compilation of the source code, following happens: 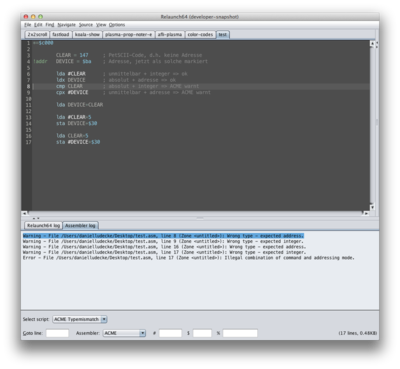 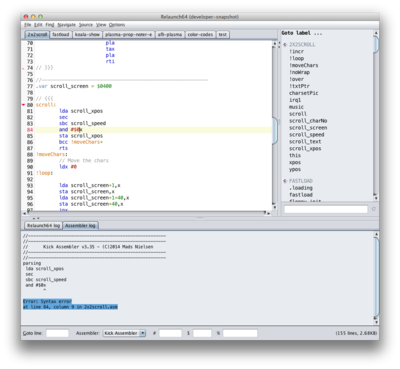 There are two possibilities to jump to error lines in the source code:

If an error or warning is located in an external file (that was included via import or src-directive, for instance), this file will automatically be opened. In the following example, pressing Ctrl+F9 (Jump to next error) would open the file test2.asm and jump to the line with the error. 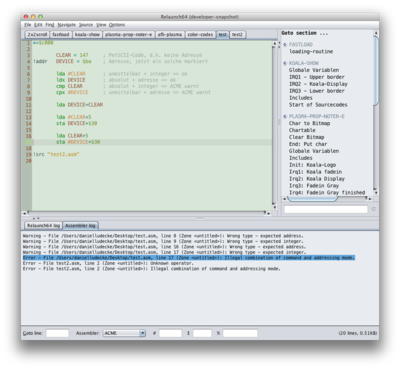 The Navigate-menu offers several commands to "navigate" through the source code. Following elements can be targeted:

The Goto-commands open a sidebar to the right of the editor. Depending on the specific Goto-command, this list contains all labels, functions, macros or sections across all opened files. At the beginning of the list you'll find the entries of the currently active source code, followed by the remaining opened files. The related file name, to which the entries belong, is highlighted in upper cased grey colored letters, with a small Commodore-icon. See following figure: 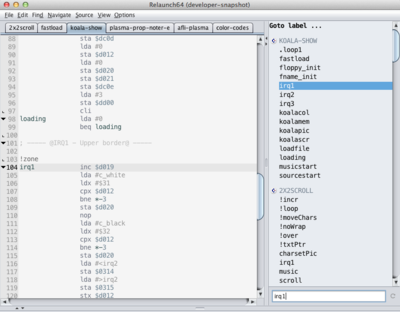 There is a text field under the sidebar, where you can type text to find entries from the lost. The first entry matching the input will be selected.

Once you hit the Enter-key, the list is filtered: All entries that do not contain the input are removed from the list. The following figure shows all labels from all opened tabs that contain the text irq (both at the beginning or inside words). 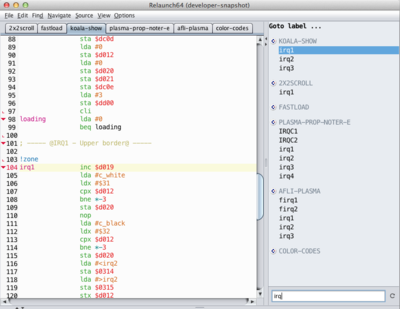 Use the Jump-commands to jump to the next or previous occurrence of a label, section, code-folder or error and warning).

While typing, you can activate auto-completion for both a) labels, constants and variables and b) functions, macros or assembler-specific script-commands. To auto-complete a), press Ctrl+Space. Following happens then:

You can complete your input by using the mouse or hitting enter key on the selected entry. Only those entries that make sense will be suggested by the popup! Local labels outside the current scope are not listed! 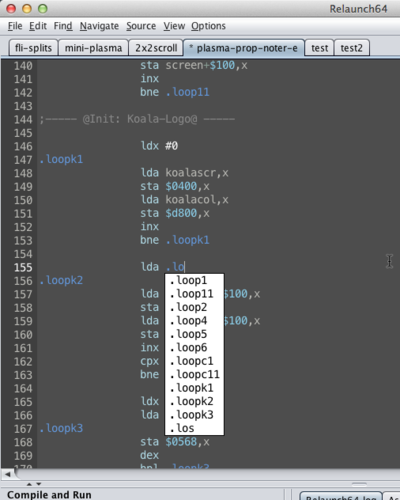 While the popup is shown, you can continue typing. The list of suggestions will be filtered accordingly.

To auto-complete b) (functions, macros and script-commands), press Ctrl+Shift+Space while typing. The procedure is the same as described above.

There are following placeholders that can be used as commented line for additional settings when compiling the source:

The START placeholder lets you specify the start address that will be taken as parameter when a cruncher or packer is called during the compile and run script call (see user script examples). The comment line needs following syntax: <comment sign> start=<start address>, for instance:

The script placeholder lets you specify a script that will always be used on compile and run script, independent from which script is chosen in the script selection list. The comment line needs following syntax: <comment sign> script=<script name>, for instance:

(will run the script named "Acme with PuCrunch")

You can insert separator lines, sections or code-folds via the Source-menu in order to structure your source code.

You can drag & drop files from the file explorer (or finder, nautilus, etc.) into the editor area to either open them or include them into your source. The drop operation depends on which modifier keys (shift and control) you hold down while dropping the selected file(s).

Without pressing and holding shift and control keys

Pressing and holding the control key

Pressing and holding both shift and control keys

Changing the layout of log-windows[edit]

The layout of the log-windows as well as the Compile and Run-area can be changes via the View-menu. Example of side-by-side-layout of editor and logs: 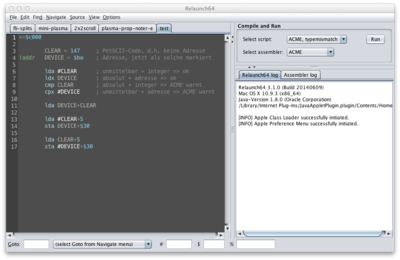 Click on the small arrows of the divider bars to collapse or expand certain areas of the IDE window: 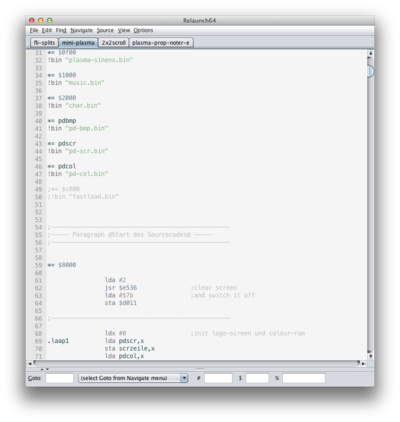 Type any numbers in the text fields at the bottom status bar to automatically see the converted numbers in decimal, hex and octal format. Furthermore, if you select a number in the source code, the converted values will also be shown in the conversion text fields. The following figure shows automatic conversion of the selection "$0810" and to collapsed code-folds: 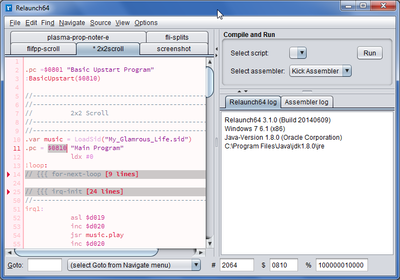 In the text field on the bottom left (see command Goto line) you can also enter specific shortcuts to quickly change settings. Currently implemented options are: 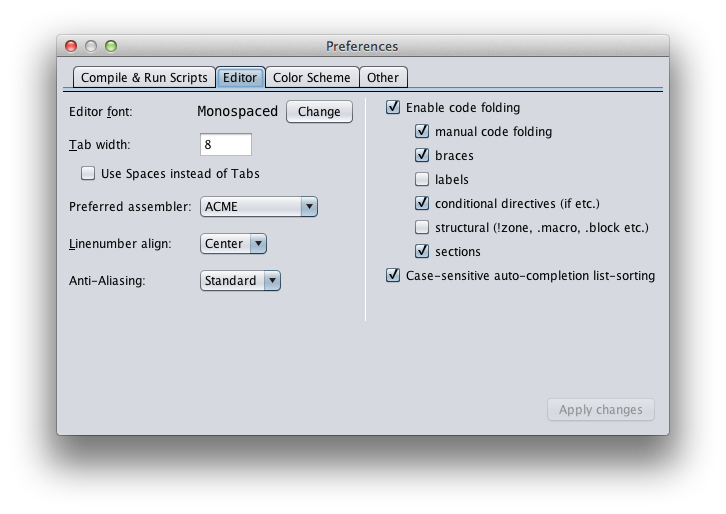 In the preference pane, you can choose between 16 different color-scheme presets. Use Alternative highlighting mode to switch between two different highlight modes: E.g., the one highlights all numbers in one color while the other mode distinguishes between addresses and number-values, see following figures: 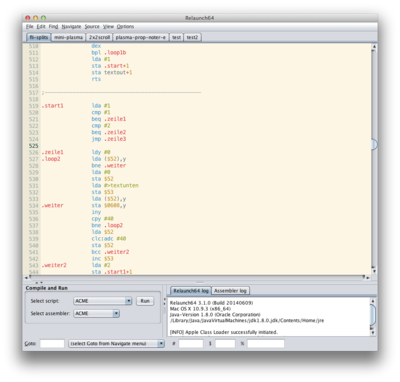 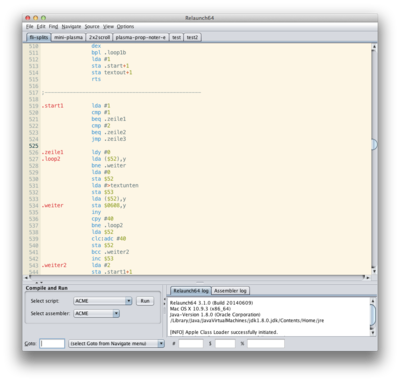 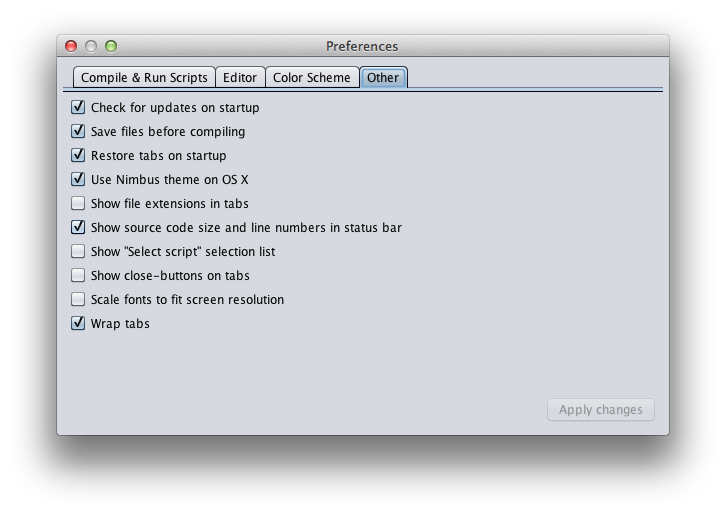