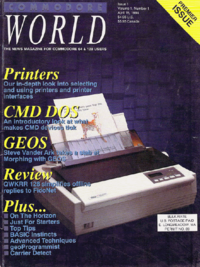 The Commodore World was a bimonthly published Commodore magazine, which was published by the hardware manufacturers Creative Micro Designs (short: CMD) in USA (4,95 U$) and Canada ($5,95). The reason was to publishing this magazin, that in 1994 no professional commodore magazine exists in North America for advertising and pricing his Commodore hardware, because at the end of 1993 the last and famous North American Commodore print magazine Compute! was finished.

The prime issue was published on April 15, 1994. Chefredakteur was Doug Cotton, who was chef of the service department of CMD. The subscriber of the Commodore World was taken over by the CSW-Verlag in 1999, which was merged this magazine with the GO64!.