From C64-Wiki
(Redirected from ZZap!64)
Jump to navigationJump to search 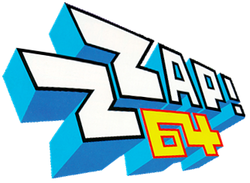 The British computer magazine Zzap!64 was published for the first time in May 1985, with a primary focus on C64 computer games. It was published monthly until November 1992 (issue 90), initially by the publisher Newsfield Publications Ltd. Over its lifetime the price ranged from about £1 to about £3. From issue 61 it was published with a datasette (titled "Megatape"), which contained games, demos of games and game tools.

From issue 43 (November 1988) until issue 65 (September 1990) it was renamed Zzap!64 Amiga, then from issue 66 (October 1990) until issue 73 (May 1991) the subtitle was "Commodore Games - C64, Console, Amiga". From issue 74 (June 1991) the focus changed again, reverting to only C64 hard- and software articles. Just four months later the publisher declared bankruptcy, but following a gap of one month the magazine was restarted with issue 79 (December 1991), with ownership having passed to Europress Impact. The last edition was issue 90 in November '92, after which the magazine changed its name again to Commodore Force.