The D64Lister is a windows application for Windows 9x or higher, which shows Commodore diskimages in D64 format. The File Viewer has some extras for e.g. converting text files or shows formated BASIC program code, also GEOS file support.

Remark from the programmer

Lars: "Because I wasn't satisfied with all the available D64 lister programs in several aspects I decided to make my own one. The D64Lister is of course Freeware."

Remark from the programmer in the Year 2021: Because some people where worried about these DLLs, these Requirements were important only for early Windows Versions (Win 95 or 98), as you can read below. In futher Windows Versions they are always present, no action is needed here. 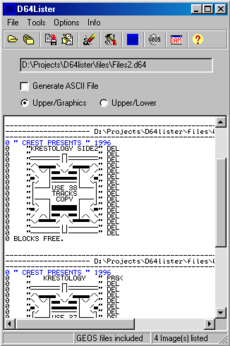 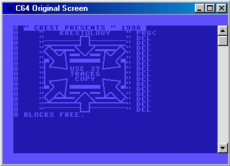 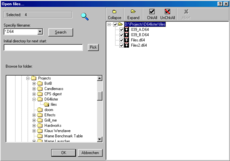 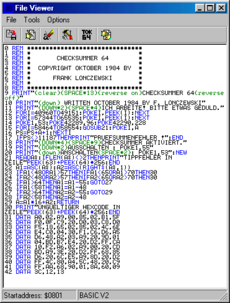 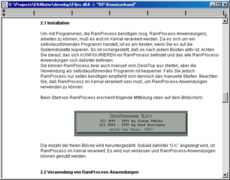 The D64Lister is featured with the following abilities and properties, which are described more precise later on:

The D64Lister is a full windows application and not a new DOS tool with output redirection.

An from the D64Lister unlimited amount of D64 images can be opened at once and their directory will be listed in C64/1541 format (including blocks free and filetype). Therefore, click on one of the "Load" buttons and choose the wanted images.

There are two kinds of OpenDialogs:

The normal OpenDialog: With CTRL/shift and leftmouse the images can be chosen. CTRL+A chooses all images in the actual directory. Double click chooses only one image.

The extended OpenDialog: After choosing a directory the D64 images found (with wildcard mask) are displayed in the FileList on the right. Here you can choose the wanted images or complete directories by checking the checkboxes. Additional a with leftclick dragged rectangle checks the images and a with right click dragged rectangle unchecks them again.

With "Initial Directory" you can choose ("Pick" or type) where to start the next time opening the Dialog. Here the following special locations are valid:

The FileList Window can be resized on the right border. This setting becomes valid the next time opening the dialog.

A click on the "OK" Button lists the images.

It is possible to open the D64Lister with D64 images as parameter. So you can include the D64Lister as your default D64 Lister in Windows. No ASCII file will be created automatically.

You can also open images by drag&dropping directories or files on the mainform.

The directory can be viewed in the mainform and/or an ASCII file with nearly full PETSCII -> ASCII conversion (codepage 850) can be generated. Therefore the checkbox "Generate ASCII File" on the mainform has to be checked.

The ASCII file can be viewed or printed in textmode (DOS prompt) with for example "edit.com". In Windows for example "DIZzy", "UltraEdit32" or "VEdit32 Plus" can be used to display the ASCII file correctly. Also any text editor should work, where the "Terminal" Font from Windows, which should emulate the textmode, can be selected. Some recommended tools are "Jane", "Angel Writer" or "Kool Padding". Here you can set the "Terminal" font as default (Fontsize 6 or 12) and can also open RTF files (not with "Jane"). For a collection of editors refer to for example http://www.heise.de/software/download/o0g0s3l11k17 .

The generated ASCII or RTF files can also be viewed in the D64Lister with File->Import.

A click on the "Save" button let you choose between Textfile or RTF file. The RTF file uses the "Terminal" Font from Windows. You can also copy (CTRL+C) the text from the mainform. The "ASCII Textfile" is the same as the "Generate ASCII File" file. Choosing "ANSI Textfile" does some conversion to chars Windows cannot display correctly.

The name of the ASCII file can be chosen in the OptionsDialog:

If the file already exists, you can choose between the following options:

The directory, where the ASCII file should be saved, can be chosen in the same way in the OptionsDialog:

If more than one image is opened the name of the directory (default name) or an earlier inserted name (insert name) will be used for the ASCII file (multifile name).

The resulting savename can be displayed after successful saving.

Additional a header (check "Generate Header" in the OptionsDialog) can be added before every listed image in the ASCII file, which includes the name of the image and some good visible separating lines.

For control or only to have a quick look into an image the C64Screen was implemented (click on "C64Screen"). This screen uses the original char from the C64 (CharROM), so it displays the directory like the original C64. The screen is zoom- and scrollable. With "Options | Images in C64Screen" the number of displayed images can be limited, because drawing the graphics in the C64Screen needs some time.

The following keys are valid:

The C64 have two Charset modes: the Upper/Graphics and the Upper/Lower mode. Filenames can be saved in these different modes, too.

The D64Lister supports these two modes. You can switch between them manually, or use the automatic recognition (Options | Auto GEOS conversion):

The Upper/Graphics or Upper/Lower buttons on the mainform are used in all PETSCII conversions of the D64Lister.

Special chars can be present in disk names and file names. The Option "Interpret Specialchars" enables their translation while listing.

The following Specialchars are translated:

Note that no linebreak is done for the Return chars. The other Specialchars (e.g. cursor down, home, clear, and so on) will be ignored, but their resulting behaviour (e.g. Rev Off) is simulated. Disknames are limited to 80 chars (like on the C64), Filenames are limited to 40 chars.

After Quotes Chars greater than 0x80 are interpreted as BASIC Tokens in disk names, e.g. char 0x8D will be displayed as "GOSUB" instead of "Shift Return".

With the Option "Display BASIC V2 Tokens" these interpretation can be enabled. The BASIC V2 Tokens can be displayed and edited in the token table in the FileViewer Options.

A Rightclick on the list shows the Options PopUp menu. A Doubleclick on a GeoWrite File opens the GeoWrite Viewer where the contents of the file is displayed. A double click on GEOS Fonts, GeoPaint Pictures, PhotoScraps and PhotoAlbums open different Windows where the resulting bitmap can be saved or Options can be set. By double clicking on a not supported GEOS File its icon will be displayed in a separate window and can be saved as a bitmap (right click). The "GEOS File Details" list is independent from the "Clear" button on the main form.

In the PhotoAlbum Viewer the following keys are valid:

A click on the export function in the PopUp menu will export all selected supported entries to their resulting filetypes, i.e. fonts and GeoPaint Pictures are exported as bitmap and GeoWrite files are exported as a RTF text file.

Before saving the List a choicebox will come up allowing you to select which segments of the Info Block should be saved.

If problems come up by sorting the List (the GEOS Details ListView only supports the used sorting algorithm with comctl32.dll Version 5.80 or later) an own sorting routine can be used. Therefore the following entry has to be added to the D64Lister.ini:

Over the ContextMenue from the GeoWrite Viewer the Option can be switched on to replace the used GeosFonts through its FontID over a Lookup Table with Windows Fonts. Therefore a Lookup Table must be inserted in the *.ini File. The entries must have this Format:

The table ist sorted by the GeosFontID while reading. The topmost entry ist used as default if a FontID present. It is recommented to use -1 as the default entry. If you just want a different DefaultFont, just enter this. The FontName is the Name displayed in for example Word, not the Filename of the FontFile. The FontName ends with a semicolon, following Chars are ignored and ca be used as a comment. The Table isn't completed yet and can be expanded.

Please have a look at: https://www.forum64.de/index.php?thread/73537-geos-fonts-als-truetype/

In the BAMViewer (click on the BAM button on the Mainform) the BAM (Block Allocation Map) of the last loaded image is shown. Disk Errors (generated with e.g. StarCommander) are shown with a red frame and the error number.

For undisturbed use of the BlockViewer with right click type 'd' in the BAMViewer to deactivate the PopUp Menu. 'a' activates the Popup again.

A click on "Show Block Owner >>" Button opens a List with the files of the actual image. A click on a filename shows its BAM entries.

A click on "Show Chain" gives the numbered BAM entries with the following meanings of the colors:

A click on a BAM entry highlights the accompanying filename.

In the FileViewer the following options are available (click "Options" button or menuitem):

Optional you can additionally choose between the following modes (Default):

If Detokenize was successful, BASIC Commands and Specialchars (for example {Up}, {Down}, {Home}) are shown in different colors adjustable in the token table. The translation of the Specialchars can be disabled in the FileViewer Options.

The following Properties can be found in the header area:

The Tokens have to be in ascending Order for proper function.
With "Use Custom Token Table" a own CSV File with Tokensets is loaded the first time needed (i.e. Open Token Table or Detokenize).
This CSV file can be edited in e.g. "Excel" or "CSVEd".
The Token Table Window supports copy/Cut/Paste.
The List separation char is automatically detected through the "Number" Row.
So an own Token Table can be made with further or other Tokensets. Further Tokensets can be found in e.g. cbm_basic_tokens.txt supplied with Vice or at http://www.npsnet.com/danf/cbm/languages.html#BASIC

Caution: Not everything can be checked, so fill the header area carefully for a new token set with respect to the default sets.
To use the Custom Token Table at Startup of the D64Lister (for example "Display BASIC V2 Tokens" at listing) add the entry LoadAtOnCreate=1 in the Section [TOK64] in the D64Lister.ini.

The Upper/Graphics or Upper/Lower Buttons on the mainform are also used inthe FileViewer.

The BlockViewer displays the selected block dependently from the FileViewer options.

In the OptionsDialog the following functions can be enabled: 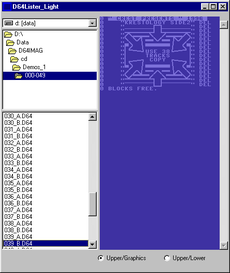 For easy listing a directory of a disk (the D64Lister was developed for that goal) can used the program "D64Lister_Light".

You can choose a directory and list it through a click or by using the cursor keys. Both char sets must be inside in the D64Lister_Light Directory or inside the Windows Font Directory.

Bug reports or other suggestions or ideas send to: d64lister@hotmail.com